The Language of the Internet in Byte-Sized Chunks

Posted by Maria Khodorkovsky in Language and Culture, Uncategorized on June 30, 2011 0 Comments 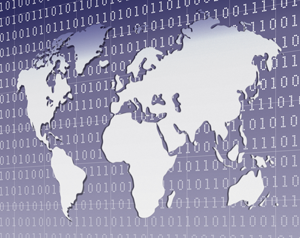 I have to admit that I’m something of a technology skeptic—neither whiz nor victim and neither extolling the internet’s virtues nor pining for the days of a tech-free world. But, having started using Google Chrome (just a few years behind the times—case in point!), I browsed the "20 Things I Learned About Browsers and the Web" article that pops up automatically to help the less savvy of us get acquainted with the omnipresence of the internet. Below is a bit of linguistic background on the terms that permeate internet use.

The internet serves as but one example of internetworking, or sending information to and from various computer networks. The year was 1974 when a number of tirelessly-working computer researchers invented what was called the Internet Protocol Suite, or TCP/IP, which would become the basis for the internet as we know it. TCP/IP provided a sort of grammar for computers, allowing interconnected devices to communicate with one another using a set of programmed rules, not unlike our grammar girdles written and spoken language.

The speed at which these devices communicate chunks of data is bandwidth, which is measured in bits per second. The term bandwidth has become more associated with internet speed than with its original usage as a way to measure the distance in hertz between the highest and lowest frequency in a range of wavelengths, or bands. Radio- and telecommunications specialists have been familiar with the term since the 1930s, but the advent of the internet propelled it into common usage. Bits—the crunched-together abbreviation of "binary digits"—comprise bytes, and somewhere between 0 and 255 bits can equal one byte, hardware-depending. The term "byte" was coined by computer scientist Werner Buchholz for IBM (International Business Machines, if we continue parsing out techie terms) in 1956 in order to avoid confusion between the two similar-sounding words.

Another oft-used but seldom thought-about term is URL, the abbreviation used to designate a website’s global address. URL stands for "Uniform Resource Locator," and is divided into the protocol identifier (like http://), which precedes the local address, or domain name. Together, these designators allow users to pinpoint the site that they want to visit.

Stay tuned for more forays into the world of the internet for language buffs.