Posted by Jes Gearing in Language and Culture, Language Training on April 5, 2010 2 Comments 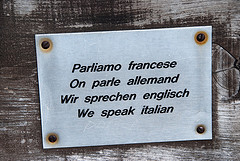 Over the past few decades, the United States has seen a steady increase in college enrollment. With higher education readily accessible to more and more people—from 1987-1997 college enrollment increased by 26%, and, from 1997-2007, college enrollment increased by an additional 18%–the ability to learn a second or third language is available to a broader audience. Given that in order to graduate from most higher education institutions a student must take at least two introductory semesters of a foreign language, and that, for many jobs, the ability to know certain languages is an asset, the percentage of students enrolling in both introductory and advanced foreign language courses has skyrocketed over the past twenty years. With that increase, there’s been a decided shift from some languages to others, but overall, the number of foreign language learners has steadily increased.

While the data from the Modern Language Association (MLA)’s 2006 study, “Enrollments in Languages Other Than English in the United States Institutions of Higher Education” is a few years old, there is still much to be gleaned from the report’s findings. From 2002-2006, the number of foreign language learners, in languages other than Greek and Latin, increased by 175,734 students, or 12.9%. Interestingly enough, during that same time period, college enrollment dropped by 48,000 students, according to the Digest of Education Statistics. So while postsecondary enrollment has increased since 1960, when the MLA began its analysis, in recent years the number of students enrolled in foreign language classes has increased while college enrollment has fluctuated by 50,000 students or so.

But what does this say about enrollment in specific languages—are certain languages like Spanish and Arabic more popular now than before?

In 1960, modern languages other than Spanish (i.e. excluding Latin and Greek) were 58% more popular than Spanish. By 2006, Spanish, however, was 15% more popular than other modern languages. This shift began in the mid-1990s, sometime between 1990 and 1995 and is a decidedly contemporary phenomenon, but it wasn’t until 2006 that the number of Spanish language learners pushed into a strong majority over every other foreign language.

The breakdown of the top five foreign languages learned in 2006 is as follows:

The first three, of course, are expected—Spanish, French, and German have always been the top three foreign languages in the United States. Until recently, however, French has always been the most popular, followed by Spanish and then German.

As heartening as these statistics are, there is a concrete difference between those who only begin to learn a foreign language and those who pursue advanced study. The ratio of introductory to advanced enrollment in all languages at all universities (including 2-year institutions), for example, is approximately 5:1. For some languages, the disparity is greater, for others not as drastic. Introductory students in Russian, it seems, do pursue advanced study to a greater degree than those studying other languages—the ratio is only 8:3. American Sign Language, on the other hand, has a ratio of 14:1—it seems that most students enroll in only a semester or two of ASL. So how does Arabic, the language with more than 100% growth fare? It’s ratio of beginning learners to advanced learners is 8:1—on par with most languages other than Spanish, French, or German, but not exceptionally encouraging if one is looking for proficient English-Arabic speakers. French and German, the second and third most popular languages, hover around a ratio of 4:1, whereas Spanish sits at one of 5:1.

Although one would think that the ratios would be closer when looking at the statistics minus two-year institutions, the ratio of introductory to advanced students is barely lower—7:2 for all languages. In regards to the top three languages, however, the ratios are much closer—3:1 for Spanish, French, and German, and Russian, while 8:3 in institutions including two-year schools, is 7:3 in four-year institutions. Arabic remains only slightly better at a ratio of 7:1.

Overall, it’s easy to see that foreign language learning at postsecondary institutions is on the rise, but it’s hard to pin down the degree to which students are actually learning languages. There’s not data, for example, on the ratios of introductory to advanced foreign language learners in 1960 vs. 1990, so it’s impossible to compare the competency level of foreign language learners now vs. then. What is easier to see is that Spanish has not just overtaken French and German as the most popular language, but also that with a 10.2% increase in enrollment from 2002-2006, it’s far out-pacing French and German with their 2.2% and 3.5% respective increases. And the languages to watch are definitely Arabic and Chinese with their 126.5% and 50% increase in enrollment from 2002-2006. Should we expect those numbers to keep growing, or will some other language become a key player in the higher education scene?