The Soul of Food 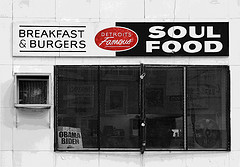 This summer feels like it has been, the summer of food. Between the premiers of movies like Food Inc. and Julie and Julia, the buzz around New York Times food critic Frank Bruni’s retirement , and the usual food and beer festivals, food—whether the art of growing it, cooking it, or properly enjoying it—has been unavoidable. The timing of some things like Food Inc. seemed more prodigious than others. President Obama’s appointment of Tom Vilsack (a proponent of increasing regulatory standards on the meat industry) as the head of the Department of Agriculture coincided with the release of the popular documentary which called for agricultural reform and exposed the rampant disease and public health issues associated with the American farming industry. Others, like the surge of urban gardening, seemed the culmination of years of counterculture sensibility erupting in the perfect climate of a recession.

All this talk of food, of course, leads to the question: what is the best? Is the best food ethical, sustainable, local and organic or is it just plain delicious? While I lean towards the local, sustainable qualifiers, it is definitely open for debate. One thing that is immune from debate, however, is the element of taste. Does organic produce taste better than that from an industrial farm? Who knows, but Nicholas Kristof suggests that the issue with industrial farming is that “it has no soul”—calories, yes, but not the element that we as thinking, feeling individuals look for in our daily lives.

I’m not sure what characterizing a farm as soulful or soulless really means, other than some gut feeling I can’t explain, but one thing I do know is that a cuisine exists that can truly be called soulful: soul food. What exactly is soul food?

Soul food is often identified with African Americans living in the South, but it is not necessarily a regional cuisine. The term itself originated in the 1960s with use of soul to characterize anything as African American—soul food, soul music, etc. There is another element to this cuisine that makes it soulful, I think. It is the history of the ingredients and recipes themselves.

The staples of soul food include rice, okra, greens, yams, and discarded parts of animals—the ears, hooves, hocks, and jowls. All of these ingredients are cheap, easily found, and represent the history of an oppressed people group. Much like the Hmong , African American slaves and their descendents relied on using whatever was readily available. Today, soul food tends to be vilified as unhealthy, and certainly the recipes tend to be high fat and high sodium, but one needs to remember that this is the food that kept an entire people group alive.

Soul, in terms of soul food or a farm with soul, means something with history, with care, with culture. The culture of the small, independent farm is certainly different than that of a thousand acre industrial farm and the culture of home cooking with cheap, hearty ingredients carries with it a long, complicated, and violent history. What the Oxford English Dictionary defines as “the principle of life in man” translates readily to food. The third definition, “the seat of emotions, feelings, and sentiments” is what I would apply to soul food and soulful farms. The emotional connection we have with food as fostered by culture is what truly defines a cuisine or a farm as soulful.