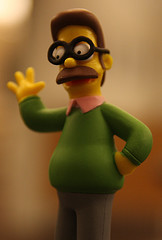 We are all familiar with prefixes and suffixes in the English language, but there is a third “fix” that is rarely discussed: the infix. An infix is a part of speech that is inserted between the syllable boundaries of an existing word, such as, say, a-whole-nother thing. It’s rare for an English word to have an infix; however, they are common in Austronesian languages such as Tagalog and German. Linguists refer to the most common type of English infix as Tmesis.

In English, there are two general categories where infixes are used: chemical terminology and colloquial language. In chemical terminology, the letters for certain compounds are often placed into the center of another word. But we are far more likely to come across the second variety, and that is largely due to the influence of popular culture icons such as Snoop Dogg and Ned Flanders.

Like Shakespeare before him (I exaggerate), American hip-hop artist, Calvin Cordozar Broadus Jr (aka Snoop Dogg) has introduced many new words to the English language. Several of those words use tmesis. Here are just a few of my personal favorites: Hizouse, Crizazy, Shiznit, and 40 ouncizzles.

Ned Flanders, Homer’s straight-laced neighbor in The Simpsons, and another sensei of slang for American popular culture, has also broadened the reach of tmesis with his trademark use of “diddly”, as in hi-diddly-do neighbor, and well-diddly-elcome.

There is also another commonly-used linguistic cousin of tmesis in English. Some of the examples here might be offensive, so if your reading this blog post out loud near any children, earmuffs might be in order. The use of a curse word as an infix used to be the primary way that English speakers used tmesis, before the pioneers Flanders and Dogg came on the scene. Common examples of this are unfuckingbelievable and fanfuckingtastic. Because with unfuckingbelievable, the insertion is not an affix, but an actual word, linguists felt the need to differentiate between traditional tmesis and what they call expletive infixation.

If you can think of other good examples of English tmesis or expletive infixation, feel free to drop a comment!