Posted by Jes Gearing in Language and Culture on December 28, 2009 0 Comments 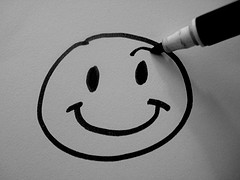 Happiness is an elusive and desirable concept. Everyone is looking for it, but it seems that few people find it. According to a new study conducted by an economics professor from the University of Warwick and Hamilton College, happiness can be attained, at least in the state of Louisiana.

In an attempt to categorize the best and worst states in which to live, the two professors created a life-satisfaction league table correlating self-reported happiness levels with objective data on the air quality, commute time, and the number of hazardous waste sites in each respective state.

Some states seemed natural in their rankings — Hawaii, for example, came out as the second happiest states, while others seemed out of place. New York, as the New York Times laments , came out dead last with a 51st place ranking (closely followed, at least, by New Jersey and Connecticut). The number one state? Louisiana. Even the researchers concede that Louisiana as the happiest state is a bit odd — given Hurricane Katrina and all — but perhaps post-Katrina Louisiana has something going for it — a fighting, thriving community determined to beat the odds and build back.

As far as the language of happiness works, the OED reminds us that to be happy is (1) to have “good hap” or fortune; lucky, fortunate; favoured by lot, position, or other external circumstance, and (2) to have a feeling of great pleasure or content of mind, arising from satisfaction with one’s circumstances or condition; also in weakened sense: Glad, pleased. Stemming from the Middle English hap and Old Norse happ, as in “chance, hap, good luck,” happiness definitely holds the connotation of chance and luck in addition to that of a feeling of contentment.

In other cultures, of course, happiness holds completely different connotations . Everyone’s definition of happiness varies, but according to cultural theorists, some distinct lines can be drawn. In North America, happiness is generally defined by a strong belief in the independence and autonomy of the self, whereas in East Asian cultures, the self-in-relationship-with-others is believed to be the locus of thought, action, and motivation. Even more so, when considering the general happiness of people living in one state (or country) than in another, researchers found that in the U.S., self-esteem was the only predictor of life satisfaction, but in Hong Kong, relationship harmony was equally important in predicting life satisfaction.

The most advanced definitions of happiness in the West were developed over centuries by philosophers. Two particularly influential schools of thought are the utilitarian notion of happiness as conceived by the likes of Jeremy Bentham and John Stuart Mills, and the ancient Greek notion of eudaimonia. For the utilitarians, happiness is defined in opposition to pain and suffering so that a person who lives with the least amount of pain and suffering can be said to be the happiest. Eudaimonia on the other hand, is a classical Greek word commonly translated as ‘happiness’. Etymologically, it consists of the word “eu” (“well being”) and “daimon” (“spirit” or “minor deity”, used to refer to one’s good fortune). Unlike the utilitarian usage of the term happiness, which refers to a state of mind related to pleasure, eudaimonia is often translated as the less subjective “human flourishing”. For Aristotle, who wrote extensively on the subject of human happiness, eudaimonia is a flourishing of life that takes into account living virtuously, developing the potential of the mind and body, building and maintaining strong relationships, and having a measure of good fortune (maintaining health and wealth).

While these are just a few examples of cultural differences in the perception and definition of happiness, they do speak to a larger issue — the translation of happiness from one culture to another, from one individual to another. Is it even possible to develop a ranking of happiness in one country with one national language, let alone a global ranking as the New Economics Foundation conducted in 2006, and again this year in 2009, with its Happy Planet Index. Yes, the external quantitative data does correlate certain environmental and physical factors with a level of satisfaction and happiness, but how much can one trust the qualitative data? It’s up for debate, but there’s certainly much more to explore linguistically with these rankings.