Posted by Tetyana in Language and Culture on October 27, 2008 0 Comments 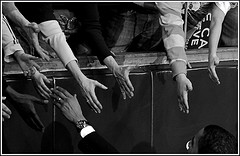 With only a week left before the U.S. presidential election, and some poll margins beginning to narrow in, it has become increasingly important for the candidates to speak directly to a group of voters who may tip the final outcome: the nation’s more than 38 million foreign born, multilingual voters. Both candidates have made attempts to translate their messages as multilingual voter registrations reached record numbers this year. Recent polls indicate that multilingual voters share the same concerns as the general voting population, who say that the most important issues facing the country are the economy, national security, health care, and immigration.

The Spanish-speaking population is the largest growing minority group, constituting about 15 percent of the total U.S. population. Hispanic voice in past elections has been somewhat muted: many are ineligible to vote, either because they don’t have citizenship status, or because they don’t meet the age requirement. Yet they do comprise 9 percent of the eligible electorate nationwide. In fact, some political commentators argue that in this election Hispanics will emerge as a potential “swing vote” because they are strategically located in four out of six states that were very close contests in the 2004 elections (New Mexico, Florida, Nevada, and Colorado).

The results of a recent Pacific Market Research / University of Washington poll of Hispanic voters in 21 states provided good reason for democrats to be optimistic in the final stretch. Obama was the favorite among 60 percent of likely voters surveyed, while McCain was favored by 23 percent.

While Spanish speakers get a lot of the attention, they are not alone as a linguistically diverse demographic. The most common languages spoken in U.S. homes besides Spanish include—in order—Chinese, French (including Patois, Cajun), Tagalog, Vietnamese, German, Korean, Russian, Italian, and Arabic. Reaching out to these voters is not an easy task for either candidate, even as it may be a key to success on November 4th.

In some states, the candidates get help. In California, for one, the office of the Secretary of State translates voter registration documents, and provides other resources for people who speak Spanish, Chinese, Japanese, Korean, and Tagalog.

Candidates who embrace the international community are at a great advantage politically. Both candidates seem to recognize this—Obama and McCain’s official websites are available in Spanish translation. Obama appears to have taken the idea further. Or rather, his supporters have.

Translators for Obama is a group of volunteers who use a Wiki-style approach to translate Obama’s speeches and major statements, various articles, and his best quotes. In addition, they provide subtitling and dubbing of video clips and promotional commercials. “New Obama Videos are Available in Japanese, Chinese, Spanish, and Captioned” reads the first entry on the group’s official website. Available translations are limited only by the number of languages the group members wish to contribute—and the membership continues to grow.

The Great Seal of the U.S. “E Pluribus Unum,” or “From Many, One” serves as a reminder of America’s much-prided attempt to make one unified nation of people from many different backgrounds and beliefs, seeking unity while respecting diversity. The outcome of the presidential election won’t be known until the votes are counted on November 4th, but it is clear that the candidate whose message reaches the pluribus will likely be the unum in the White House come next January.