Posted by Tetyana in Translation on October 1, 2008 0 Comments 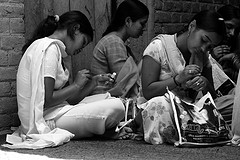 Not surprisingly, non-profit organizations with a global outreach are among the largest employers of translators and interpreters. However, the impact of non-profits on the translation and interpretation service industry, which relies on the existence and protection of linguistic heterogeneity, is ambiguous. There is, in fact, an interesting dichotomy: on the one hand, non-profit institutions promote preservation of multilingual diversity; on the other hand, they impede this process.

In order to understand how non-profit institutions impact the demand for translation and interpretation services we need to take a closer look at two different kinds of non-profits.

Although statistics vary, over 30,000 international non-profit organizations are registered annually around the world–25,000 of which are characterized as non-governmental organizations (NGOs) and about 5,000 are intergovernmental entities (IGOs). Generally sharing humanitarian goals, NGOs and IGOs have crucial distinctions in their positions on translation and language policies. The origin of this distinction is partially ideological. The function of most IGOs, especially the ones under UN jurisdiction, is to monitor the power imbalances among various nation-states, including disputes arising from linguistic differences.

By their nature, IGOs are generally more closely aligned with central governments: they receive financial support from the ruling authorities, and in turn share government attitudes and priorities towards national language policies. IGOs are likely to advocate multilingual diversity for emblematic, rather than practical, purposes.

In the Holy Roman Empire, for example, where power was dispersed among nation-states, imperial translation played a symbolic role, uniting culturally and linguistically plural society. A more recent example can be identified in the multilingual organization of the European Union, which does not have a common language policy and adopts twenty-three languages of the member-states as its official languages. Or take the United Nations, which has 192 member states and six official languages (Arabic, Chinese, French, English, Russian and Spanish) that are not chosen for any practical purposes, but rather are representative of the various phases of the organization’s expansion.

In contrast, NGOs usually have less funding and are more concerned with efficiency and economizing on translation expenses. NGOs are less likely to have on-staff translators and interpreters. Structure and practices of international NGOs typically derive from a different ideology, where the loyalty to the common mission and purpose overrides the symbolism of “one nation, one language.”

Although there are many arguments in favor of preserving linguistic diversity in non-profit institutions, more often than not, pragmatic concerns — usually in favor of financial efficiency — take priority.