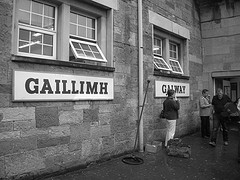 Irish speakers will now be able to use Google’s online translation tools to translate web documents into Gaeilge. In addition to translating specific pages and text, the tool allows users to search English webpages with Irish keywords. “Web results about safari tour companies in English, French or another language can be translated into Irish in “a fraction of a second” using the Google tool.”

From the Irish Times: Manx is NOT Dead

Thanks to Language Hat, I was able to find this BBC report about the classification status of Manx. Apparently UNESCO originally classified Manx as extinct in its 2009 Atlas of World Languages in Danger. Thanks to Chief Minister Tony Brown’s letter to UNESCO which argued that the language is still flourishing on the island, UNESCO has decided to change Manx’s status to “critically endangered.” One of the more endearing letters to UNESCO came from students at Bunscoill (the Manx language school on the island). “”If our language is extinct then what language are we writing in?”

I find this interesting because it is essentially a clash between a conservation agency and a species. As Hertzog pointed out, language conservation is needed, but what happens when the conservation efforts are misguided? Thankfully it appears that reclassification isn’t a major issue—UNESCO immediately changed its classification of Manx. It will be interesting to see if more issues like this one arise with the increased effort to classify and preserve languages.

Won’t You be my Neighbor?

Finally, a last thought compliments of Always Greener: “One of the most interesting aspects about the recent arrest of Henry Louis Gates Jr. was something that went completely unreported in the US, though I suspect it would have been the first thing on everyone’s mind in Europe: why did the man’s neighbor call the cops in the first place?

I imagine that most neighbors would know each other, and if you don’t you can probably just walk over and see who the guy is — at least in Europe. In the US, you might be afraid that the guy is going to have a gun and kill you.”

Maybe the first step to preserving a language is preserving its culture, or at least making the effort to getting to know your neighbors.