Posted by Jes Gearing in Language and Culture on December 9, 2009 0 Comments 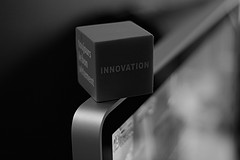 Innovation: it’s a word that conjures up images of scientific advances—meat in Petri jars, prosthetic limbs, the next big as-seen-on-TV product. It is also, as David Brooks reminds us, something viewed as quintessential to the American self-portrait: America prides itself on innovation. But what meaning does the word carry that makes it such a key concept? Is innovation reliant on invention or can it mean something else, and how does it pertain to American identity now, almost a decade into the twenty-first century?

Brooks frames the question of innovation within the current stages of the economic recovery, and subsequent “anxiety that the recovery will be feeble and drab.” He then goes on to say, hold your horses, “let’s not get carried away with the malaise. The U.S. remains the world’s most competitive economy, the leader in information technology, biotechnology and nearly every cutting-edge sector.”

Well, it looks like for the moment innovation is inextricably linked with invention—specifically that of technology. While Brooks doesn’t explicitly link the two, several paragraphs later he does say, “there’s a straightforward way to revive innovation.” But does innovation need reviving; or, rather, can it even be revived?

According to the OED, to innovate is to (1) “To change (a thing) into something new; to alter; to renew;” (2) “To bring in (something new) the first time; to introduce as new;” (3) “To bring in or introduce novelties; to make changes in something established.” While the first definition is set aside as “rare after 1750,” I think it holds the key to understanding the innovation that Brooks is referring to.

If innovation means, at its core, to revive, then, no, innovation cannot be revived—it either is or it isn’t, it’s either reviving itself or not. Of course common use of the word has moved over to the third definition, and this is the innovation Brooks is interested in—novelty, technology, change. To revive change or novelty, still, seems a bit oxymoronic since novelty is defined as “something new, not previously experienced.”

When Brooks pushes into the heart of his call for innovation, he emphasizes political and economic moves like fulfilling education reforms, funding scientific research, addressing global imbalances, etc. Again, however, we’re faced with the key term disagreement—none of these proposals are new, unusual, or not previously experienced. They are not the novel, they are not changes in something established—they are continuations.

Sure, calling this push for additional funding sounds better when it’s boxed and labeled under the concept of innovation, but, if we are to stay true to the definition of innovation, a different word would be better—accountability, and that word would be truly innovative in America today.