Posted by Maria Khodorkovsky in Etymology on February 12, 2009 1 Comment 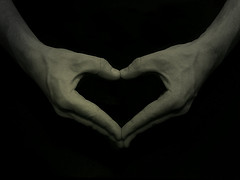 VALENTINE
The practice of choosing a special person to be one’s valentine on February 14 began in the mid-14th century as an English and French courtly custom. Valentine cards may have originated with Saint Valentine himself, a Roman priest who purportedly continued to perform marriages in secret after they were outlawed by Emperor Claudius II in order to have a larger pool of unmarried men for military service. After Valentine was arrested and imprisoned, he fell in love with a young woman who visited him during his confinement, sending her cards and letters to relay his feelings.

LOVE
The word love comes to us from the Proto-German lubo and the Gothic liufs, both terms for affection and friendliness, as well as the appellation of a beloved or sweetheart.

ROMANCE
Romance began as a 14th-century literary term for a kind of poem that recounted tales of a hero’s adventures. The term comes from the Latin romanice scribere, meaning to write in a Romance language or in the Roman style. Eventually the focus in these tales shifted to the protagonist’s amorous escapades, taking a semantic shift in the territory of love stories.

KISS
Originally from the Proto-Germanic kussijanan, this verb came into modern usage from the Old English cyssan.

ROSE
The name of this flower came into modern usage from the Greek rhodon via Old English.