Ways to Pass the Time for the Linguistically-Inclined: Crossword Puzzles

Posted by Maria Khodorkovsky in Uncategorized on June 15, 2011 2 Comments 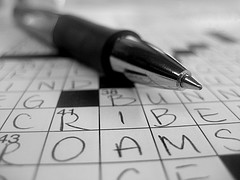 Do you know your classical architecture? Can you glean "DNA" from the clue "Letters from your parents?" Does your knowledge flow seamlessly from ancient Greek philosophers to today's sitcom stars? If so, you may well be fluent in "crosswordese," a lexicon seldom used in day-to-day speech but one that's naturally and necessarily acquired by crossword puzzle buffs around the world. While the history of crossword puzzles has not even spanned a century, this pastime of the linguistically-inclined has followers that will go to great lengths to get their daily fix of pithy aphorisms and intentional anachronisms.

Crossword puzzles flourished in the 1920s and 1930s after being introduced to the American press in 1913 by a journalist named Arthur Wynne. Wynne's crossword, published in the newspaper New York World, featured 31 clues whose answers would be housed in a diamond-shaped puzzle with no internal black squares. A misprint changed the name of the game from "word-cross" to "crossword," and within a decade almost all newspapers printed their variety of the cryptic puzzle.

The year 1924 saw the publication of the first book of crossword puzzles by Simon and Schuster, spawning increased popularity, as well as the accompanying undertow of alarm and criticism. A writer at the New York Times claimed that the puzzles were nothing more than "a primitive form of mental exercise" and "utterly futile." Other publications asserted, too, that this type of word game had no discernible intellectual value and that the fad would be long forgotten in a matter of months.

History would prove otherwise: by World War II, there was such an interest in crossword puzzles that military intelligence analysts pored over them, searching for encrypted messages and potential traitors and spies. In 1944, U.S. security officers found what they believed to be a series of secret code names revealed in crosswords in the Daily Telegraph. The puzzles in question included the names of key landing sites for Operation Overlord. The author of the crosswords—a schoolteacher named Leonard Dawes—was questioned, but investigators determined that he had no intention of passing on confidential information. In England, crossword-solving competitions would serve as one step in hiring cryptologists for the war effort.

Today, millions of people worldwide have the opportunity to enjoy crossword puzzles in newspapers, books, and online. Nearly half a dozen crossword apps exist for smart phones, allowing people to practice their "crosswordese" on the go.