10 Confusing English Words and How to Conquer Them

Posted by Maria Khodorkovsky in Language Training on January 4, 2010 1 Comment 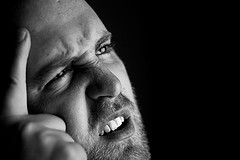 Whether it’s a matter of difficult spelling or multiple meanings, these ten words pose a degree of difficulty to a great many English speakers. Below you will find their definitions, with a rundown of ways to make sure you will never have a problem telling them apart.

SYMPATHY and EMPATHY
The word “sympathy” has been used in the English language far longer than has its sibling “empathy.” For centuries, “sympathy” meant the ability to “feel with” another person – to understand and to be affected by his circumstances. In the early 20th century, “empathy” worked its way into English as a term utilized in psychoanalysis. Whether being empathetic helps or hinders the agent is up for debate, but having such a quality does imply a great deal more effort than merely being sympathetic. Being empathetic entails not only “feeling with” another entity, but also projecting oneself onto that entity to fully comprehend its state of being.

FLAUNT and FLOUT
Here we find another case of similar sounds and wholly different meanings. To flaunt a quality or object is to put it on display, to parade it around in order to impress others. To flout something is to scorn it and treat it with contemptuous disrespect. The latter has a surprising etymology, most likely form the Old English flouten, meaning “to play the flute.” Apparently the flute could make a fairly derisive-sounding whistling sound.

DISCREET and DISCRETE
Most of the time when we wish to utilize discretion, we mean the first term, Discreet: prudent, cautious, and not in plain sight. The second word, discrete, is typically used in the field of mathematics to refer to distinct and separate entities.

STATIONARY and STATIONERY
When you are standing in one spot, you are stationary. When you write a letter on fancy paper and stamp it closed with wax, you are using stationery.

VENAL and VENIAL
Though they sound similar, these words could not be further apart in meaning. A “venial sin” is a small peccadillo – pardonable, easily excused, and quite minor in nature. The word originates in the Latin venia, meaning “forgiveness.”

“Venal,” however, indicates something far graver and more reprehensible, stemming from the Latin, venum, meaning “sale.” This term came to indicate a person susceptible to corruption, who could be bought or bribed if the price was right.