Posted by Manny Echevarria in Language and Culture, Most Popular on November 17, 2008 3 Comments 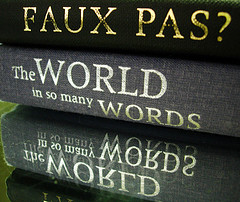 A loanword is a word used directly from another language with little or no translation. Such foreign words and phrases are peppered throughout the English language.

Every kind of English writing, from poetry collections and cook books, to newspapers and magazines, contains thousands of words that have been adopted from foreign languages by writers constantly in search of le mot juste.

I asked our resident linguists and translators to name a few of their favorites, and we came up with the following list of top 20 foreign loanwords used by English speakers:

Schadenfreude
[German] The pleasure one takes from someone else’s misfortune.

Hoi Polloi
[Greek] The many, or the masses. Usually used in a derogatory sense to refer to ‘common people’ vs. the ‘upper-crust’ of society.

Faux pas
[French] The violation of a commonly accepted social rule, a blunder like a gaffe.

Poshlust
[Russian] From the Russian word, poshlost, meaning ‘petty, trivial and vulgar’, it was re-branded by Vladimir Nabokov to mean ‘trashy, falsely clever, and falsely beautiful’.

Kitschy
[German, or Yiddish] The quality of being lowbrow, tacky, or in bad taste, usually used in reference to art or decorations.

Aficionado
[Spanish] An ardent admirer or fan of something.

Doppelgänger
[German] A double, or look-alike person, often with negative connotations since some people believe that seeing your own doppelgänger is an omen of impending death.

L’enfant terrible
[French] A child who says or does really embarrassing things, or, a successful adult whose achievements were executed in an unorthodox way.

Basmati
[Hindi] Something with a pleasant aroma, fragrant. In English, it is usually used along with ‘rice’ to refer to the Indian dish.

Prima donna
[Italian] Literally, ‘first lady’ as in the principal female singer in an opera, but usually used to refer to a spoiled, ill-tempered person.

Mea culpa
[Latin] Literally, ‘my own fault’. Usually used by a person who is admitting guilt for some wrong-doing.

Quid pro quo
[Latin] Literally, ‘something for something’. Often used in place of ‘you scratch my back and I’ll scratch yours’ or during negotiations to ask, ‘what’s in it for me?’.

Nouveau riche
[French] Newly rich. Usually used in a derogatory sense to refer to someone who uses newly-earned wealth to purchase kitschy things.

Alter ego
[Latin] An ‘other self’. Used to describe the other personality of a person who leads a double life.

Zeitgeist
[German] The spirit of the times. Used to describe things in the socio-cultural air, like trends or ideas that describe an era.

Taco
[Spanish] The traditional Mexican dish made from a corn or wheat tortilla filled with just about anything your heart desires and eaten out of hand; Perhaps, the perfect food?