3 Most Common Suffixes in Medical Terminology

Posted by ALTA Language Services in Etymology on November 15, 2018 0 Comments 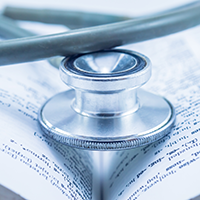 The world of medicine offers language lovers an uncanny look into our prevalent and inescapable Latin and Greek origins. While we hear and read the language of medicine on a daily basis, most of us seldom have the opportunity to examine the ancient history and etymological origins of these terms. To rectify that, below you will find three common suffixes used in the medical field.

The majority of fields of study – not solely in medicine, but in all branches of research – end in this suffix. From the ancient Greek verb legein, meaning “to speak”, this omnipresent suffix came to connote a person or entity that speaks on or studies a certain subject. Thus, any root word affixed with this ending is a study of some sort.

ITIS: A diseases that causes inflammation

LYSIS: The breakdown or dissolution of an entity

Another suffix commonly associated with pathologies, it stems from the Greek lyein, meaning “to loosen, untie.” Both the terms palsy – coined in the 14th century – and paralysis – emerging in the 16th century – stem from this root and connote a weakened state. In fact, the term “lysis” is used in biology to discuss the dissolution of cells or bacteria, and this usage can be seen in words like glycolysis (the breaking down of sugars) and even more colloquially in the word analysis (the breaking down of information).

We owe quite of a bit of our everyday language origins to the Ancient Greeks and the Romans’ use of Latin. Not only are these common suffixes used in the medical field, but also in our natural conversations with others. Learn more about our medical interpretation training courses at https://learn.altalang.com/about-us.

ALTA Language Services is a renowned translation company that has been serving Fortune 500 companies, government, and non-profit organizations for over 30 years. With a team of professional interpreters and linguists, ALTA has provided consistent quality and accurate translations in all industries. Contact ALTA today for a free quote for your translation and interpretation needs!