6 Calendars Around the World

Posted by Danielle Martin in Language and Culture on December 30, 2019 0 Comments 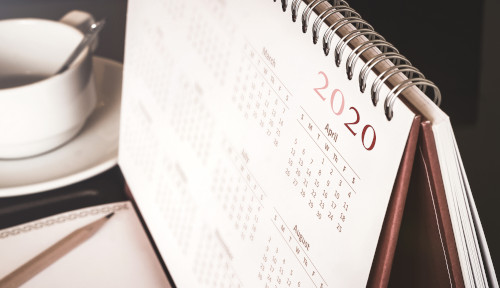 The Gregorian calendar dates back to 1592, when Pope Gregory XIII instituted it as a revision of the Julien calendar. After its introduction, it slowly spread across Italy, then to Portugal, Spain, and the German Catholic states. In 1699, it was adopted by the Protestant German states; in 1752, by England and its colonies, including the United States; in 1753, by Sweden; in 1873, by Japan; and then in the early nineteen-hundreds it was adopted by China, the Soviet Union, and Greece. Today, it is the most popular calendar system in the world.

Those of us who use the Gregorian calendar are about to head into a new decade – the 2020s. As we approach this milestone, it’s interesting to note that although the Gregorian calendar is the most common time-keeping system in the world, it certainly isn’t the only one. Today, we’ll look at six other calendars in use today, according to which we are living anywhere from the 1300s to the 2000s, and even as recently as back in 2012.

One of two calendars used on the Indonesian island of Bali, the Pawukon calendar year is two hundred and ten days long and consists of six thirty-five-day months, a number which reflects the ancient rice-growing cycles of the island. Beyond this, it is highly complex and can be quite difficult for outsiders to understand. There are ten different concurrent weeks of one, two, three, four, five, six, seven, eight, nine, and ten days, meaning that the first day of the year is the first day of all ten weeks. As such, the eleventh day of the year would be the first day of another ten-day week, the second day of a nine-day week, the third day of an eight-day week, etc. But that’s not all – since two-hundred and ten is not divisible by four, eight, or nine, days tend to repeat in those weeks. And unlike the Gregorian calendar in which Tuesday always follows Monday, the days of the Pawukon calendar do not always occur in the same order.
Many holidays in Bali are set according to the Pawukon calendar, but some follow their lunar calendar instead. It’s known as the Saka calendar, and with twelve months consisting of twenty-nine to thirty days each, it’s relatively similar to the Gregorian calendar. Whew!

Although modern-day China relies on the Gregorian calendar, the traditional Chinese calendar still governs the dates of important holidays such as the Chinese Lantern Festival, and it is also used as a tool for selecting auspicious dates for weddings, funerals, moving, and starting businesses. The Chinese calendar is essentially a lunar calendar, with twelve months of twenty-nine or thirty days that each begin on the first day of a new moon. Leap months, rather than days, are added as needed. Each month can be referred to by an animal name or a number, which also correspond to particular hours of the day, as well as years in the zodiac cycle. In order of occurrence, the animals are rat, ox, tiger, hare, dragon, snake, horse, sheep, monkey, fowl, dog and pig. Variants of the Chinese colander are also used in Korea, Vietnam and the Ryukyu Islands.

If you live in Ethiopia, you’re behind time…literally. Based on alternate calculations of the date of the announcement of Jesus Christ’s birth, the Ethiopian calendar is seven years behind, with its new year corresponding to September 11th of the Gregorian calendar – or September 12th if it’s a leap year. That puts right now at early 2012 in Ethiopian time.

If it doesn’t already seem like keeping appointments might be difficult for tourists in Ethiopia, things are about to get even more confusing. In addition to date conversion, hour conversion is necessary as well. This is true because most Ethiopians don’t keep time using the ante meridian (am) and post meridian (pm) timing system. Since Ethiopia is close to the Equator, daylight hours remain quite consistent throughout the year. So local time is based on a twelve-hour clock, with one cycle from dawn to dusk and the other cycle from dusk to dawn. Thus, seven a.m. in East Africa time corresponds to one o’clock in daylight hours in local time, and at seven p.m. East Africa time, Ethiopians start over again, and it becomes one o’clock in nighttime hours.

The Hebrew or Jewish Calendar

Like the Chinese calendar, the Jewish calendar is lunar, with each month commencing with the new moon. The issue with strictly lunar calendars is that there are approximately 12.4 lunar months to each solar year, so a twelve-month lunar calendar is slightly too short, while a thirteen-month lunar calendar is slightly too long. Adhering to either one would cause the year to “drift” relative to the seasons. Thus, if utilizing a twelve-month lunar calendar, the Jewish month of Nissan, which is supposed to occur in the Spring, would eventually fall back to the winter, the fall, and then the summer. This matters because most holidays and festivals have traditionally been tied to the seasons as well as the dates of their occurrence. This problem was solved in the fourth century when Hillel II created a fixed Jewish calendar in which the month of Adar is repeated every third, sixth, eighth, eleventh, fourteenth, seventeenth, and nineteenth year in a nineteen-year cycle. Now, Passover always occurs during the month of Nissan, while the Jewish New Year occurs during the month of Tishri.
It’s interesting to note that, while many Jews outside of Israel have adopted the Gregorian calendar, they do not generally use the abbreviations A.D. and B.C. A.D. literally means “the year of our Lord,” and because Jews do not believe that Jesus is Lord, they instead use the abbreviations C.E. (Common or Christian Era), and B.C.E. (Before the Common Era).

The Islamic, Muslim or Hijrī Calendar

The Islamic calendar is also lunar, but unlike the Hebrew or Chinese calendars, it does not use leap months or days to account for the difference in length of the solar year. Therefore, the named months do not remain in the same seasons. Instead, they slowly retrogress through the entire solar year, taking thirty-two and a half years to reoccur at the same seasonal time. The start date of the calendar is based off the Hegira, the Islamic Prophet Muhammad’s journey from Mecca to Medina. In Muslim countries, the Islamic calendar is primarily used for religious purposes, while the Gregorian calendar is used for civil purposes.

The Persian or Solar Hijiri Calendar

The Persian calendar has been called “one of the world’s most accurate calendar systems.” Like the Islamic calendar, it dates back to Muhammad’s Hegira in 622 CE, but it is otherwise quite different. It’s a solar calendar, rather than a lunar one, with the year beginning on midnight of the vernal equinox in Iran. There are twelve months, of which the first six have thirty-one days, the second five have thirty days, and the last month, Esfand, alternates between having twenty-nine days or thirty days in a leap year. Unlike the Gregorian calendar, which uses a set of mathematical rules to determine when leap years fall, leap years on the Persian calendar are determined by the number of days between the two vernal equinoxes. This calendar is currently used officially in Iran and Afghanistan.

Interested in learning a language spoken somewhere that uses a different calendar system? ALTA Language Services is proud to offer online and in-person language training services. Contact us to learn more about our language programs and services.

About the Author: Danielle Martin has taught multiple subjects to students in three different states. She previously spent time as a literary agent’s assistant and video editor. Danielle writes about education, health, and lifestyle topics, and she also enjoys writing fiction.