A Brief History of English Punctuation

Posted by Maria Khodorkovsky in Language and Culture on June 15, 2009 1 Comment 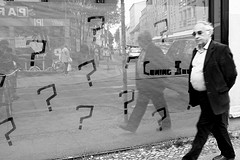 The familiar marks that punctuate text – the periods, commas, semicolons, and so forth – have not always added their pauses and emphases throughout the history of the written word. Many of the texts that we now read with ease gained these marks centuries after being written with no punctuation at all. Additionally, punctuation rules vary from language to language and culture to culture, so that immaculate grammar and stringent rule-following in English does not equate to a good grasp of Russian or Chinese punctuation.

It took centuries for English to acquire its steadfast rules for punctuating texts. Here is just a brief look at some of the steps that led us to our present usage.

The period – or full stop – marks the end of a sentence. Though utilized for a variety of different purposes throughout the history of written language, the period gained its present use during the establishment of printing. Aldus Manutius the Elder, an Italian printer and publisher of the 15th century, is commonly credited with standardizing several elements of punctuation. Manutius also created the semicolon to introduce pauses in text and manipulated the already-existing virgule, or slash, into the modern comma, which gets its name from the Greek komma (κόμμα), meaning something that is cut off. Writers and scholars of the 16th- and 17th-centuries like William Tyndale, Ben Jonson, and Francis Bacon further encouraged the standardization of English punctuation by both recommending systematic usage and utilizing it in their own writings.

The exclamation mark, which signifies surprise and was originally called the note of admiration, gains its name from the Latin Io, meaning joy. In its original usage, the letter “I” was written above the letter “O”, giving the appearance of a sign that looks like the modern-day exclamation mark.