A Note on Hmong Language and Culture

Posted by Jes Gearing in Language and Culture on July 16, 2009 3 Comments 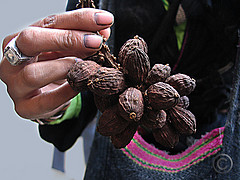 When a blurb about Cooking from the Heart: the Hmong Kitchen in America popped up in my Google Reader, I was instantly intrigued because it claims to be the first American cookbook detailing Hmong recipes. How is it possible that no other Hmong cookbook in America (or in English) exists?

The quick answer is that the Hmong language had no written form until the 1950s, and without a written form it has been difficult to catalog the Hmong culture. The written language, known as “the Romanized Popular Alphabet (RPA)” or “Hmong RPA” was developed in Laos between 1951 and 1953 by missionaries and Hmong advisors. While it is the most common form, Pahawh Hmong is also used. An indigenous written language, Pahawh Hmong was developed by an illiterate peasant, Shong Lue Yang, who believed that God had revealed to him the true Hmong writing in 1959. Over the next 12 years, Shong’s disciples taught the language as part of a cultural revival. Shong was assassinated in 1971 by Laotian soldiers but his disciple Chia Koua Vang continued to develop the language. The script is now semi-syllabic like the Cherokee language, but is also influenced by Laotian and Roman script.

Given that the Hmong script is so new, it’s not surprising that no cookbook has been compiled for the culture, although it is unfortunate that it has taken this long. The cookbook authors describe the recipes as “simple, earthy, firery, and fresh” and most are vegetable and herb based with a small amount of protein stretched to feed a large group. Since the Hmong people are scattered throughout southern China, northern Vietnam, Laos, Thailand, and Burma, the food is inspired by these varied cultures, and as is typical in many of these countries, white rice is served with every meal and spices play a prominent role. Hot peppers, lemongrass, ginger, scallions, and garlic are commonly used, as well as different sauces like oyster sauce, fish sauce, and sriracha. The meals are served communally, with food placed in the middle of the table and, unlike some cultures, spoons, forks, or chopsticks are always used—eating with one’s fingers is considered extremely impolite.

While I haven’t yet read the cookbook or tried my hand at any Hmong dishes, I plan on doing so soon. Food is equally as important as language in preserving culture, and like the Hmong language revival in the 1950s, this cookbook is helping to expose and to archive not only Hmong cuisine, but also the culture’s general customs.

For more information about the cookbook or to find out more about Hmong cuisine, check out the website here.