Beyond Txt | Crowdsourcing With txteagle

Posted by Jonathan in Language and Culture, Translation on February 18, 2009 0 Comments

txteagle is an ambitious initiative that aims to empower and employ the people of least developed nations via their cell phones. By leveraging a vastly underused work force in some of the poorest parts of the world, its founder, Nathan Eagle, hopes to change the world for the better.

Despite the great innovations that computers engender in societies around the word, the perception and dexterity of a human being remains unmatched in tasks such as transcribing and translating text from another language.

The business of utilizing this human expertise to address problems where automated solutions come up short has become a mainstream phenomena called crowdsourcing. Crowdsourcing is a neologism for the act of taking a task traditionally performed by an employee or contractor, and outsourcing it to an undefined, generally large group of people or community in the form of an open call. Google is allowing its users to refine search results, Amazon uses a system called Mechanical Turk to off-load all manner of simple tasks to humans around the world and even the Catholic youth organization of Cologne, one of Germany’s largest dioceses, is on board!

According to Nathan Eagle,

“We’re trying to . . . tap into a group of people to complete these tasks who haven’t been tapped before and we’re using mobile phones, which have a high penetration rate. More people are mobile-phone subscribers in developing countries than in the developing world, so we can get a user base of billions of people.” 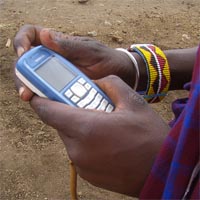 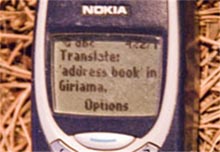 Cell phone manufacturers and users alike would love to have phones in every African’s mother tongue, but translating words like ‘address book’ into every language poses a particular obstacle.

Nokia has recognized this challenge and is playing a fundamental role for txteagle by funding Entrepreneurial Programming and Research on Mobiles (EPROM). Nokia is interested in software localization. Translating its software for specific regions of the world, with specific regions of countries can be facilitated and performed by txteagle users. According to Eagle,

There are 60 different languages spoken in Kenya, and txteagle users can earn money by acting as resources to various localization projects. […] For example, people receive a survey or questionnaire, and translate the words into their own languages. We keep issuing the same task to different people until we get enough of the same translated word responses to ensure a minimum 95 percent confidence interval that we have the correct translation of the word.

Users would be paid via a service called mPesa, which enables currency to be sent and received via cellular phones. The individual would then use their phones to claim the money at mPesa agents and post offices. 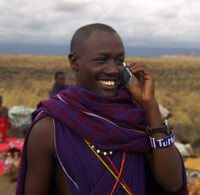 In a recent article about txteagle, written by Kate Greene in MIT’s Technology Review, Greene cites Sharon Chiarella’s, the vice president of Amazon’s Mechanical Turk project, comments on bringing crowd sourcing to developing nations and its limitations. For instance, the most widely available cell phones are generally only able to send and receive text and voice messages. More complex tasks, such as tagging images, are not always possible.

“The cell-phone screen size somewhat limits the tasks that can be viable via the phone, But I think that as cell phones continue to evolve, some of those issues will go away.” 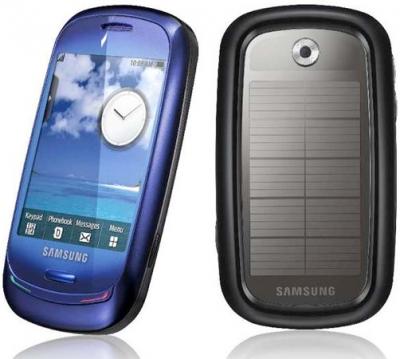 Well, it seems, they recently have. Granted, it’s no Nokia but Samsung recently unveiled a solar powered phone. The Blue Earth phone will be made from the plastic of recycled water bottles and contains no Brominated Flame Retardants, Beryllium or Phthalate. Could such technology be the missing link for the global implementation of txteagle and other such crowdsourcing concepts?

Perhaps, but Eagle plans to maintain the goal to start small (though, Africa is hardly small!) and see if the model works well enough to expand. He hopes to receive grant money that will allow txteagle to roll out the service in Rwanda, Kenya, Bolivia, and the Dominican Republic within the next year.

Translation is not txteagle’s only mobile task possibility. Transcription, Citizen Journalism, Search Relevancy, Blog / News Translation & Sentiment and Surveys are just the start. To learn more go to the txteagle website here and watch the video below.