What Can Artificial Languages Tell Us About the Way Our Brains Learn and Process Language?

Posted by Maria Khodorkovsky in Language and Culture, Uncategorized on April 3, 2014 6 Comments 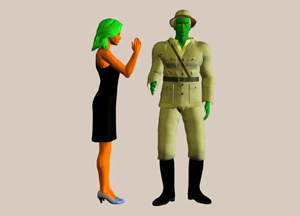 As intriguingly varied as world languages are, linguists agree that they share certain structural factors that broach continents and cultures. For decades, the roots of this phenomenon have been debated and explored; a study out of the University of Rochester sheds some light on a potential explanation.

The study, conducted in conjunction with the University of Rochester and Georgetown University, and published in 2012 in the Proceedings of the National Academy of Sciences, consists of two simple artificial languages created in order to analyze how people manipulate words to create clear meaning. Using computer images, video clips, and audio recordings, monolingual participants were taught 15 nouns and 8 verbs, along with the grammar of the artificial languages. The participants were then asked to describe a scenario in their newly-acquired language. Because these languages did not have set rules for word order, a fascinating trend was observed: test subjects modified the rules of the language, clarifying meaning by shifting word order. If, for example, the subject and object of the sentence could be confused, participants added case markers – like those that exist in languages like German, Russian, Japanese, and Korean – to ensure comprehensibility.

These results suggest to researchers that people prefer language to be clear, precise, and efficient, and that this preference, in turn, structures much of what we take for granted in our speech. Specifically, the study illustrates how we balance clarity and efficiency: participants did not always opt for using case markers, but rather used them only in instances where there could be confusion between subject and object. Researchers extended this principle to the common abbreviation of longer words and use of contractions, both of which allow us to maximize efficiency while retaining clarity of communication. This tendency toward balance may help explain the structural and grammatical similarity of many languages. While many linguists theorize that these similarities stem from a distant, common language, some have postulated that they may in fact be reflections of cognitive similarity.

[Illustration: “Bliffen slagum shen.” Translation: “Singer hunter chop.” Unlike English, the artificial languages used in the study had free word order. When the subject and object could be easily confused, participants chose to reshape the language by using case markers to make their meaning clear. This created the same pattern seen in naturally occurring languages such as Japanese and Korean and may help to explain why so many of the world’s languages share similar structures. Credit: The Human Language Processing Lab at the University of Rochester]