Currywurst: Language History in Every Bite

Posted by Jes Gearing in Language and Food on September 14, 2010 3 Comments 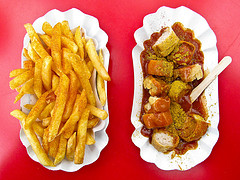 As a food writer, chef, and television guru Anthony Bourdain often points out during his show, No Reservations, that every culture has their “meat in tube form,” and, that more often than not, this meat product (i.e. hotdog, bratwurst, sausage of some form, etc.) is delicious. One of these meats in tube form that always intrigued me — but always alluded me in concept — is Germany’s currywurst (literally curry + the German wurst, or sausage). Having never been to Germany, I’ve never encountered the sausage up close or given it a taste, so my knowledge about the ubiquitous street food has relied on brief mentions of it on food blogs or delicious-looking vegan renditions of it.

When Nicola of Edible Geography posted on the history of currywurst the other day, I was immediately hooked. The article focuses on the Bundesinstitut fur Risikobewertung’s (BfR) use of didactic plant mazes to educate the public about food and health issues. The BfR is the German equivalent of the FDA in the United States and is responsible for studying and assessing food products for health and safety. The plant labyrinth — literally a labyrinth made out of plants in the shape of a currywurst — is dotted with placards and informative displays discussing the production, and health factors involved with the popular street/fast food. Nicola was disappointed in the labyrinth’s inability to address, as a government project, “the multiple pathways through which the soybean infiltrates today’s food culture, or the economic nodes and exchanges of [the] consolidated meat industry,” but for me, the labyrinth opened up other questions, like what is a currywurst and who decided that curry and ketchup and sausage go well together?

The Wall Street Journal claims that currywurst is “as German as pizza is Italian, hot dogs are American, and fish and chips British,” and that “no two Germans will likely agree on the perfect currywurst.” Can we even attempt to describe the perfect currywurst? In its basic form, currywurst consists of fried bratwurst (pork sausage) seasoned with a curry sauce composed of ketchup and curry paste or powder. The complications arise when the entire dish is considered — do you serve it with French fries, white, or wheat bread? Often mayonnaise is the accompanying condiment.

The backstory of the sausage dish is a bit more complicated though. The Deutsches Currywurst Museum traces the origin of the dish to post-WWII Berlin and Herta Heuwer, a “witty German housewife [who] got her hands on some English curry by trading it against spirits with parched British soldiers.” At the time, spices were on short supply, and the dish that resulted from the swap was what we now know as currywurst: “grilled sausage, sliced, with a gravy-like sauce containing English Curry and stewed tomatoes.” After her invention, Heuwer started her own street stand, and it eventually grew to be a popular restaurant. Other stands and shops began to sell renditions of the dish, each varying slightly from the original because Heuwer took her recipe to the grave. To this day, some claim that no two currywursts are the same, and the street food has maintained cultural significance. It’s featured in films and music, and politicians making populist appeals often stage photo-ops at currywurst vendors.

At first glance, currywurst is uncomplicated, literally being the marriage of curry and wurst. Beyond the ingredients, however, the dish has in some ways come to represent the proletariat culture of Germany — a culture that is highly individualized and complex. So, the next time you grab a hotdog, a bratwurst, or a currywurst from a vendor, pause to consider how the history of a word and people can be infused in a simple bite of tube-form meat.