Define This: Dictionaries in the News

Posted by Jes Gearing in Uncategorized on November 8, 2010 1 Comment 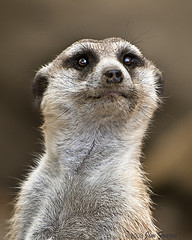 Dictionaries, in print or online, rarely make the news. Arguably, these books and internet databases once represented the most solid and universally accepted of language, but this seems to have changed drastically this year.

Look no further than Aleksandr the Meerkat, an outstanding fictional mammal. A few weeks ago he celebrated two momentous occasions: first, the publishing of his “autobiography” A Simples Life which chronicles the once “self-made insurance flogger and now meerkat-of-letters,” and second, the induction of his catchphrase, “simples!” into the Collins English Dictionary. How, exactly, a fictional meerkat can prove so popular is a mystery, but the mammal’s broken-English charm has infected many — some 41,000 people follow “him” on Twitter, with another 762,000 facebook fans.

In addition to the rather meerkat-centered Collins English Dictionary uproar, a plethora of other internet words have been added to the dictionary, from the Twitter-centric “retweet,” “tweetout,” and “tweetheart,” to politics’ “Con-Dem,” “Con-Lib,” and “Lib-Con.” Generalities aside, the “bigotgate,” — “describing the former prime minister’s [Gordon Brown’s] encounter with disillusioned Labour supporter Gillian Duffy in Rochdale in April” — and “Zumba” — the popular dance-fitness program — are also included in the release. Dictionaries, it seems, are not just for traditional linguistics anymore.

An earlier piece of dictionary-related news was on this side of the pond. In January of 2010, the UK Guardian released an article on the banning of the Miriam Webster’s 10th Edition Dictionary from some California classrooms. The Menifee Union school district in southern California removed the dictionaries from classroom use for the fourth and fifth grades due to the definition of “oral sex” as “oral stimulation of the genitals.” The ban persisted for several weeks until the protests of a majority of parents overturned the decision.

Back in England, the Oxford English Dictionary surprised many by openly recently musing on the possibility of releasing the third edition of the dictionary solely online. Although the new OED will not be published for another decade or so, the thought of it being released only in a digital format is, at turns, both surprising but still somewhat expected. Sales of the 20-volume print version are minimal — even though the print version looms large in intellectual currency. What “proper” literature graduate student doesn’t own the abridged OED? With Nigel Portwood’s (the head of Oxford University Press) announcement of the possibility of an online-only dictionary, the OED is certainly something to watch for in the news in the coming months and years.