What do the Roma speak?

Posted by Paul Sutherland in Etymology, Language and Culture on March 14, 2018 0 Comments 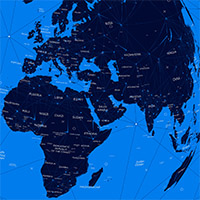 The Roma are a traditionally nomadic ethnicity with communities all the way across Europe and beyond. Often misunderstood and mistreated – a topic I won’t go into – they are typically thought to be homogeneous. Language variation is just one way to illustrate that this is definitely not the case. The answer to “what do the Roma speak?” is a rabbit hole that can go as deep as your curiosity.

At the entrance to that hole are a couple of obvious answers. First, there is
the lingua franca of the country they live in. The Roma’s migratory history and culture means there is no centrally recognized homeland, making the language of wider communication fairly essential. Second is the Romani language. More accurately, language resource Ethnologue names it a ‘macrolanguage’, referring to the fact that Romani can be subdivided into a number of varieties (to them, seven) distinct enough to be their own languages.

Romani, fascinatingly, originates in South Asia and is in the Indo-Aryan branch of the Indo-European language family. Its grammar and core vocabulary, therefore, is related to Sanskrit and the other Indic languages like Hindi, Urdu, and Punjabi. Despite a very similar name, and the large amount of Romanis in Romania, Romani is not at all related to Romanian. The word ‘rom’, meaning a male Romani, is probably derived from Sanskrit ‘doma’, referring to the caste.

From one to ten, let’s compare Hindi (left) and standardized Romani (right) numbers. I’ve simplified the Romanized (also not related to Romani!) Hindi here for ease of reading, as it’s not normally written in this script.

You’ll notice that 7 to 9 are different. These are borrowed from Greek. The rest are clearly very closely related, mostly differing only in a vowel, voicing or consonant position, and there’s more concrete (but less digestible) evidence from the grammar.

Okay, so we have the lingua francas of their countries (including the US, home to around a million Roma). We have the Romani macrolanguage, divided up into a number of distinct languages, some with up to hundreds of thousands of speakers. What else?

Each of these languages has a number of dialects, sometimes named for traditional jobs like goldsmithing and bear training. There are literally hundreds of these.

The Romani languages’ influence is not constrained to their own varieties. There are also dozens of mixed languages, formed by applying Romani vocabulary to non-Romani grammatical structures. These include Scottish Cant, merging Romani, Scots, Gaelic and English, and the Basque-derived Erromintxela.

Some Romani has even slipped into English. Polari slang, famous for its use by the British gay community when homosexuality was illegal, adopted Romani words. It’s hard to verify a lot of Romani etymologies, but a couple that have migrated from Romani through Polari into wider English are ‘zhoosh’ (up, to improve something) and – less likely to be Romani – ‘drag’, as in ‘dressing in drag’. British slang terms ‘chav’ (a working class pejorative, from ‘chavo’, meaning child) and ‘pal’ (friend, ultimately from Sanskrit for ‘brother’) appear to be direct borrowings.

So, what do the Roma speak? Well …