Does Fairness Translate?: An Economist and a Linguist Delve into the Cross-Cultural Variations of What We Consider Fair

Posted by Manny Echevarria in Language and Culture on January 30, 2009 11 Comments 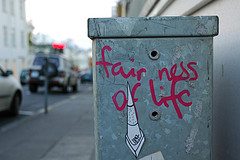 Recently, a debate has surfaced that combines the efforts of Economists and Linguists. At the center of the discussion is the etymology, meaning, and translatability of the English word Fairness.

The crux of the argument was presented by the American economist Bart Wilson in a piece he published this week in The Atlantic’s Brave New Deal. Wilson employs the work of Australian linguist Anna Wierzbicka to argue that the English term Fairness is uniquely Anglo-American, and therefore, poses a problem for behavioral economists who use the Ultimatum Game in research intended to help solve complex socio-economic problems.

Many people who are much smarter than I am have added their thoughts in the argument that ensued, so I will not attempt to make any grand contribution. However, I do think that it would be beneficial to use this blog post to bring together the different points that are floating around online. Think of it as a nerdy linguistics mashup, with an occasional interruption from yours truly to introduce a new source:

Because the word [Fair] is so central to how markets work, I’ve been engaged in a somewhat dizzying struggle to understand it better, or at least clarify how economists apply it to economic behavior. That’s the topic of my latest paper. Early in my project I turned to one of my favorite linguists, Anna Wierzbicka of Australia National University, for her insight into the meaning of the word. Luckily for me, when I emailed her she pointed out that she had recently published a whole chapter on this very topic in her book English: Meaning and Culture.

Did you know that fair is one-to-one untranslatable into any other language–that it is distinctly Anglo in origin? And a relatively new word at that? (Late 18th century, actually–the industrial revolution apparently also vastly enhanced our capacity to complain.) But the twisted history of “fair” is even more interesting than that. For the original antonym of fair is not, as most modern Americans would probably expect, unfair. If you want to understand the roots of fairness, look not to ethicists, but to baseball, which still uses the original dichotomy. If a ball is hit outside the bounds of fair play, it’s not unfair–it’s foul. That’s an important clue. As Columbia law professor George Fletcher had noted in his 1996 book Basic Concepts of Legal Thought, the Anglo-American notion of fairness is firmly rooted in the rules of a game.

These observations have deep implications for our understanding of this social concept, particularly as it relates to economics. Let me be clear: I am not claiming that Anglophones are the only fair people on the planet. It’s just that fair doesn’t have an exact equivalent in any other language. Other languages either directly import the English word, as in the German exclamation, “Das ist nicht fair!”, or fail altogether to have a comparable word, as is the case for French.

German speakers might note that they frequently also use the word gerecht in addition to fair; French speakers might say that they have not one but two words for it: juste and équitable. True enough. However, depending upon context, gerecht is also translatable into English as just or equitable. That’s a three-to-one translation, not one-to-one, and probably one reason why the Germans directly import the English word. And while équitable is often translated as “fair”, it can also be rendered as equitable, and similarly, juste can be translated into English as just. These languages may have the sense of fairness, but we have a word for it that they do not.

From comments by James Surowiecki, a staff writer for The New Yorker magazine, who was quick to dismiss the linguistic aspects of Bart Wilson’s argument:

Let’s set aside the fact that the definition of “untranslatable” is itself hard to pin down, as are its implications for thinking about human feeling. (English doesn’t have a single word that means the same thing as the German schadenfreude, but no one thinks this means that Americans don’t take pleasure when others fail.) What’s more perplexing about Wilson’s argument is that the ultimatum game has been played in many different countries with similar results. The amount of money that is considered “fair” is different from culture to culture, but in almost all places unfair offers are rejected. (One piece of counter-evidence comes from experiments done with the Machiguengan Indians of Peru, who are small-scale subsistence farmers.) So while it may be true that concepts of fairness are not innate, the experimental evidence, at least, suggests that fairness as a concept is not an invention of the English-speaking world, even if only English has a word for it.

From Bart Wilson’s response to Surowiecki:

After translating the instructions and altering the protocols to fit different cultural settings around the world, we observe that mean offers vary from 48% to 26% of the pie. We may all have a sense of fairness, but our sense of what is fair varies pretty dramatically.

From Language Log linguist Mark Liberman’s analysis of the issue:

Well, another interesting question would be, is there really any evidence to support the view that differences between languages (as opposed to other cultural differences, or more simply, differences in the way the game is set up) actually affect how people play this game? And then there’s the more difficult question of whether the existence of a word “one-for-one translatable” as “fair” makes a critical difference. So far, I haven’t seen any evidence for a believable effect of language at all — but perhaps it’s out there. We know that linguistic priming can make a moderately large difference in the behavior of bilinguals on certain sorts of psychological tests — roughly half a standard deviation, in some well-designed and controlled experiments. Is this true of the Ultimatum Game? If it is, how much of the effect can be predicted by the distribution of senses among words whose meanings are in the general area of equitable, just, fair, etc.?

It is often assumed that fairness needs to be understood in terms of equality or equity, but that is not so. Consider, for example, the collocation Fair Prices. Here, the focus is not on prices being the same for everyone, but rather that they are justifiable (in terms of what is reasonable for both sellers and buyers).

Other uses of fair bring out additional distinctions: a “strict but fair” parent, and the team does not “play fair”.

I don’t find this line of argument very convincing. In general, that’s because it’s not clear that polysemy (or greater or lesser specificity) of a language’s words in some conceptual space has the strong relationship to thought and culture that the argument presupposes it should. In this specific case, moreover, English fair is also polysemous (meaning “considerable” in phrases like “a fair amount” or “a fair number”, and “moderate” in phrases like “fair-sized”, and “of slightly below average quality” in contexts like “fair to poor”, and so on). Does this mean that we anglophones are also handicapped in our appreciation of fairness, tending to confuse it with medium-sized portions of questionable quality?

But in fairness to Wilson, he’s all over gerecht, and he’s tried to frame his argument (the whole “one to one” deal) specifically to allow for it. Given that a Swedish-English dictionary gives “just, fair, equitable” as the English translations of rättvist, his arguments (whatever their quality) would apply there as well.]

Wierzbicka points out that for American philosopher, John Rawls, fairness is linked with a democratic conception of society — it has it’s origin in the idea of a social contract that presupposes publicly recognized and generally accepted rules. For Rawls, the emergence of Fairness as a modern Anglo term can be seen as related to the Post-Enlightenment move away from metaphysics and the shift towards an ethics based on reason and social cooperation.

Remarkably, our concept of fairness does not readily translate into other languages. It is virtually impossible to find a suitable translation for fairness in European or Semitic languages. As a result, the term is transplanted directly in some languages such as German and Hebrew, and absent in others, such as French, which is resistant to adopting loan words that carry unique meanings.

Wierzbicka cites an interesting example of the French use of juste translated as fair from the original English translation of a work by Jean Piaget:

When Piaget’s classic work, The Moral Judgment of the Child, was translated into English by Marjorie Gabain in 1950, Piaget’s word Juste was in most contexts rendered in English as Fair. It is an illusion to think that when Piaget was studying the emergence of the concept of justice in French, he was studying the emergence of Fairness as the English reader may unsuspectingly assume. For example, when Piaget asked French speaking children to give examples of what is not Juste, the children cited examples that included lying, stealing, and breaking things.

Mark Liberman on the “No Word for X” Fallacy as it pertains to this discussion:

In the past, we’ve discussed (and ridiculed) claims about “no word for sex” and “no word for when” and “no word for accountability” and so on. These were naive and often ill-informed claims, made as rhetorical gestures by people who had not thought very hard about the facts and ideas involved. Anna Wierzbicka’s book is a different matter — she’s a linguistically sophisticated polyglot, who has looked carefully into the history and thought carefully about what it means. That doesn’t mean that her facts and interpretations are all correct, but they can’t be dismissed so cavalierly.

I’m afraid that Wilson presents a sort of stick-figure version of her argument in his essay (along with getting some dates and so on wrong); and Suriowiecki’s third-hand version is much worse (“the word ‘fair’ is apparently untranslatable into any other language”)

A final word from your humble editor:

Our native language and culture are influential in shaping the way we think about human nature and questions about self, reality, and society. When we restrict serious discussions to a monolingual perspective, we risk getting things wrong. That’s fine if these types of arguments remain in the academy, where the stakes are fairly low, but it can have serious repercussions when the debates involve economists whose work directly affects our day to day lives, especially these financially gloomy days. Whether or not one agrees with Bart Wilson, it is refreshing to see a serious economist taking linguistic issues seriously, and I expect that this discussion will result in a more nuanced understanding on the part of the dismal scientist and, perhaps, better economic theory.