Skip to content
Don’t Go Trusting Me Too Much, Kid: The Language of Westerns

Home » Beyond Words » Don’t Go Trusting Me Too Much, Kid: The Language of Westerns 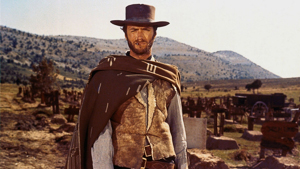 Every year brings with it an eagerly anticipated summer movie season. Whether or not you personally enjoy 2014’s crop of action, superhero, comedy, and horror films, some may one day form part of their particular genre’s canon.

Caught in the zeitgeist of summer moviegoing, we’re starting a new feature that will highlight and examine the language found in our favorite film genres. For our first installment, we’re looking at a genre that “embodies the spirit, the struggle, and the demise of the new frontier” in the words of the American Film Institute.

Westerns hold a warm and nostalgic place in U.S. cinematic history, although their familiar “spaghetti western” counterpart refers to the string of excellent films made by Italian director Sergio Leone and scored by composer Ennio Morricone. The genre’s multicultural roots stretch even deeper, drawing from samurai history and Arthurian lore in equal parts.

But what spans both time and geography is the internal logic that governs our honor-bound heroes and pitiless villains. The tropes that define a genre also supply the phrasing we associate with it. Below you’ll find three of the most unmistakably Western themes and the mode of speaking that evolved from each of them.

It’s no wonder that Westerns were enormously popular during the era of silent films, as even a look at the genre’s language is incomplete without acknowledging the importance of holding one’s tongue as a cowboy. Controlled, clipped, and closed-off speech is the hallmark of characters that mistrust language and prefer deed over dialogue. The strong and silent type is more liable to gain the upper hand when possible and escape with his life when needed.

“I guess you think I’m kicking you, Bob. But it ain’t so. What I’m doing is talking, you hear? I’m talking to all those villains down there in Kansas… in Missouri… in Cheyenne.”
– Little Bill, Unforgiven
[Watch: Unforgiven (1992)]

In Westerns, talking is so undesirable that other actions have to replace it. Kicking, for one. But stoic wordlessness is not the domain of good guys or bad guys. For hero and villain alike, speech is not only unnecessary but a sign of vulnerability and weakness. It’s only fools, Falstaffian types, and women that haven’t gotten the memo that talking disrupts the monolithic Western landscape, the rough, terse atmosphere it requires.

“You’re a good looking boy, you have big broad shoulders, but he is a man. It takes more than big broad shoulders to make a man, Harvey, and you have a long way to go. You know something? I don’t think you will ever make it.”
– Helen Ramirez, High Noon
[Watch: High Noon (1952)]

The story’s already written. The decisive, matter-of-fact utterances that Westerns are so famous for highlight the unalterable course of events that made them who they are and that will shape their behaviors until the end.

Doc Willoughby: “I’m looking forward to the day when it’s you they’ll be calling me for.”
Liberty Valance: [tossing a silver dollar] “Paid in advance.”
[Watch: The Man Who Shot Liberty Valance (1962)]

“Whoever double-crosses me and leaves me alive, he understands nothing about Tuco. Nothing!”
– Tuco, The Good, the Bad, and the Ugly

It’s hard to resist the allure of a good taunt. Whether it comes on the heels of an ego-bruising or that last slug of whisky, tough talk in Westerns incorporates the previous two themes in an immediately recognizable sound and feel.

“Any man don’t wanna get killed better clear on out the back.”
– Will Munny, Unforgiven

Western tough talk is not about complex jabs or lengthy accounts of why and how they plan to do away with the enemy. Instead, it’s about asserting dominance through that combination of silence and inevitability that shows the unlucky adversary that what’s about to happen to him is written in the stars.

With sparse language, characters in Westerns prop up the power and mystery that adds weight to their proclamations.

Here are just a few of the amusing nicknames from a genre where epithets are as numerous as bullet-riddled bodies: