Skip to content
Encounters at the End of Language

Home » Beyond Words » Encounters at the End of Language 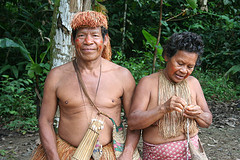 The other evening as I was watching Werner Herzog’s latest film, Encounters at the End of the World, I was struck by an interview about half way through. In the scene, Herzog and his crew enter a greenhouse at around 1 am in Camp McMurdo, the largest settlement in Antarctica, and discover a typical citizen of the icy frontier: a scraggly bearded, twenty- or thirty-something man. In the fashion of the rest of the documentary, Herzog immediately set to asking this man, William Jirsa, what brought him to Antarctica. Again, typical of many of the inhabitants of Camp McMurdo, Jirsa rambled off on a story that ended in the shambles of his dissertation. His research had failed so what else was there to do but set off for Antarctica?

Jirsa’s research, however, wasn’t exactly what you’d picture for someone living in the subzero barren reaches of Antarctica. He was a linguist. Most of the incredibly interesting details aside (I’m not the most meticulous note taker while watching films), Jirsa’s story went something like this: He set off to study, learn, and record a language that would disappear with the death of the remaining native speaker. Somewhere along the line, according to Herzog’s summation of the tale voiced over part of the linguist’s interview, a few “new age” mother Earth people got to this linguist and convinced him that it would be better for him and for the world to let the language die than to archive it—that allowing the words to disappear would be more natural than preserving them in writing and on tape. Instead of pushing forward with the project, the Jirsa returned home, destroyed his research, and was left with nothing to show for his years of coursework, research, and writing. With no plans and nowhere to go, he headed to Antarctica to work in Camp McMurdo.

Unsurprisingly to anyone familiar with his films, Herzog is disgusted by the people who counseled the linguist to give up his research. He followed up the interview with one of the most provocative quotations of the entire film:

In our efforts to preserve endangered species we seem to overlook something equally important. To me it is a sign of a deeply disturbed civilization where tree huggers and whale huggers in their weirdness are acceptable while no one embraces the last speakers of a language.

I watched the movie because I love Herzog’s genius in analyzing borderline characters—those who toe the line between passion and insanity—and because I figured he would have something interesting and bleak to say about penguins (he did and it’s worth watching the movie just for that). I wasn’t expecting the most profound statement about human life that I’ve heard in a long time.

Just this week Elizabeth Rosenthal published an eye-opening article about global climate change and deforestation in the Amazon River basin of Brazil. Instead of focusing on the effect of deforestation and global climate change on the plants and animals found in the river basin, Rosenthal centered on their effect on indigenous peoples. When the fish swim elsewhere (or die) and the seasons become drier, indigenous people lose their two main life forces: fish and the cassava root. The warming waters of the Amazon River and its tributaries can’t support many of the species both animals and humans depend on for food. Additionally, the changing weather patterns mean that it isn’t raining as much as it used to. The particular tribe Rosenthal interviewed experienced cassava crop failure four times last year. As a result everyone and everything is forced to evolve in order to survive, and in a world so far removed from grocery and seed and feed stores there is nothing to switch to in the Amazon, only cities to move towards. 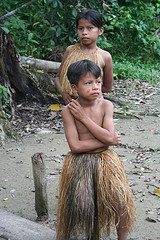 The extinction of indigenous Amazonian culture signals not simply the end of a way of life but also the end of language. I had the privilege several years ago to spend time in the Peruvian Amazon river basin and meet a medicine man and several people from the Yagua tribe. Who knows how long their culture and language will remain intact—the very people I met might be living in a village closer to or in Iquitos or some other major port city—and that fact depresses me.

It is ironic that we spend so much money and so much time championing charismatic animals like the panda bear or the penguin and yet forget about the people affected by species loss and habitat change. Who’s to say linguistic and cultural extinction isn’t as important as the extinction of a salamander or the Northern Spotted Owl? I think Herzog has a point: our conservation efforts, if measured by total species and habitat diversity, have a long way to go.