Posted by Jes Gearing in Endangered Languages, Language and Culture on April 20, 2011 2 Comments 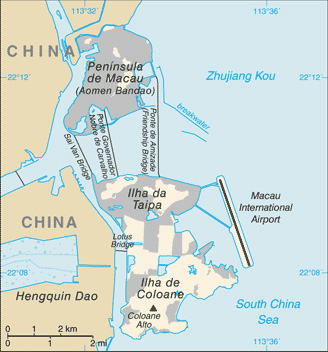 This installment of the Beyond Words' feature Endangered Language Watch—in which writers discuss languages at risk of extinction around the world—will focus on the Macanese language.

Macanese: A Chameleon of a Language

Imagine a people whose native language combines Malay, Sinhalese, Cantonese, and Portuguese, and whose native territory will only be their own for another fifty years. These people are the Macanese, and they live in a tiny corner of southeast China in an outpost of cultural identity growing smaller and smaller by the day.

A few months ago, the New York Times published an interesting article highlighting the cultural, geographic, and linguistic issues facing the Mecanese people. The article gives a small taste of the culture of Macau, one of the two special administrative regions of the People's Republic of China (Hong Kong being the other one). Geographically, Macau lies on the western side of the Pearl River Delta, bordered by the Guangdong province and the South China Sea. According to the New York Times, it is a region in cultural peril—a place and people who are no longer culturally succinct, under pressure by Western and decidedly global forces.

Although the history of the territory dates back to the Quin Dynasty (221-206 BCE), it did not develop as a major settlement until the Portuguese colonized it in the sixteenth century. Established in 1557, the Portuguese settlement quickly became a point for Chinese slave trafficking. It wasn't until 1887, after the end of the Opium War, that Portugal gained complete control of Macau and China ceded all rights to it. Macau continued to exist as a colony through the nineteenth and most of the twentieth century until the 1974 overthrow of the Portuguese dictatorship. At that point, the new Portuguese government relinquished all overseas possessions, and in 1976, Lisbon redefined Macau as a "Chinese territory under Portuguese administration." In 1986, it became a Special Administration Region of China. Along with Hong Kong in 1999, the Chinese government assumed formal sovereignty over the area.

Given this tumultuous heritage, it's easy to understand how Macau essentially defines its culture via its multiculturalism. Senhora de Jesus, a ninety-five year old woman interviewed by the New York Times said of the culture, "We Macanese are always mixing it up… We are very adaptable." This "mixing it up" and adaptability are most apparent in the language: Mecanese. Mecanese or Macau Creole (also known colloquially as Patuá) is "among the last of the creoles that once flourished in the constellation of ports that made up Portugal's Asian and African holdings," and is a mix of Malay, Sinhalese, Cantonese, and Portuguese. Symptomatic of its mixing is the number of names that Mecanese is recognized by— Papia Cristam di Macau ("Christian speech of Macau"), Dóci Língu di Macau ("Sweet Language of Macau"), Doci Papiaçam ("Sweet Speech"), and Macaista Chapado ("Pure Macanese").

The language itself arose after Portuguese influence in the sixteenth century. Its primary means of development was through the descendents of Portuguese settlers. Through marrying local Malacca or Sri Lankan women (as opposed to women from China), the language developed a strong Malay and Sinahalese influence from the get-go, but by the seventeenth century, the influx of immigrants from other Portuguese colonies in Asia began to influence the language. The next century brought the influence of Cantonese, after the literal walls separating Macao's Portuguese and Chinese quarters were torn down. Further building on the mix, many English terms entered the Mecanese vocabulary with the British occupation of neighboring Hong Kong. Other European and Asian languages also contributed to the language's development.

While very little research focuses on Macanese grammar, the language incorporates both European and Asian elements. In the Asian language strain, Macanese lacks definite articles and does not inflect verbs. It also lacks weak pronouns (i.e. "io" means "I," "me," and "mine"). Plural nouns are achieved by reduplication ("casa-casa" means "houses"), as well as plural adjectives and emphatic verbs ("cedo-cedo" means "very early"). This pattern of reduplication stems from Malay. Beyond grammar, Macanese has no standardized orthography, making it nearly impossible to maintain a written archive.

In 2009, UNESCO classified the language as "critically endangered," meaning that "the youngest speakers are grandparents and older, and they speak the language partially and infrequently." The organization estimates that 10% of the world's some 6,000 languages are critically endangered, the last marker before extinction. The NYT article takes great pains to emphasize the degree to which the language (and the culture) are disappearing—for starters, fewer than 10,000 of Macau's 500,000 people are Mecanese. "There are probably more Macanese living in California and Canada than Macao," states Miguel de Senna Fernandes in the article. Ninety-five percent of the territory's population is now Chinese.

Fernandes learned Patuá from his grandmother who would speak it with her friends. He would listen in and then ask her to translate words he didn't understand. "More often than not they were unsuitable for an 8-year-old's ears but his grandmother would oblige with sanitized translations, followed by an admonishment to stick to studying proper Portuguese," the article states. Heartbreaking, though, is his grandmother and her generation's attitude towards the creole: "The old-timers considered Patuá broken or bad Portuguese," hence how little of the tongue has been passed down to younger generations. Fernandes, however, champions the language and has created a dictionary of Patuá expressions, "and for the past 18 years he has staged an annual play that revives what local people call 'doci papiaçam,' or sweet speech, a stew of archaic Portuguese, Malay and Singhalese spiced with English, Dutch and Japanese, and more recently, a large helping of Cantonese."

Current economic growth due to the influx of casinos to Macau brought back some of the diaspora—former immigrants drawn in by the lure of stable jobs and the homeland. The majority of Macanese, however, live abroad in Canada, California, and Peru, and the language is certainly disappearing along with other Macanese cultural norms. One of the challenges facing the language might very well be its malleability and the way that it picks up cues from other imposing cultures. The future of the Macanese language may be one of change, of adopting new words and syntax and grammar from new host countries—be it further from the English, Spanish, or French languages. Some Macanese are working to revive the language through literature, theater, and music, but revival requires the participation of the younger generations, the generations who will carry it forth into the mid-twenty-first century. Only time will tell where the future of Mecanese lies, but hopefully it won't be found with the 250 other extinct languages listed in UNESCO's count.