Esperanto – The Language of International Peace

Posted by Janet Barrow in Language and Culture on April 26, 2019 1 Comment 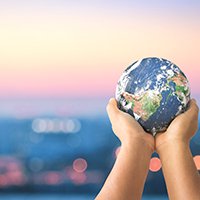 Bonan matenon, kiel vi fartas? That’s Esperanto for ‘good morning, how are you?’ If you’re trying to remember what country Esperanto is spoken in, don’t flex those brain muscles too hard. Because while around two million people from more than one hundred and twenty countries speak Esperanto, you’ll be hard-pressed to find more than a handful of native speakers anywhere in the world, let alone any country where it’s listed as an official language. That’s because Esperanto is not a natural language – it’s a constructed one, invented in 1887 by an eye doctor named Ludwig Lazarus Zamenhof, who went by the pseudonym ‘Doktoro Esperanto.’

Now, before you jump to any conclusions, this isn’t a fantasy language like Dothraki, Klingon, or any of the more than fifteen languages invented by J.R.R. Tolkien. Instead, Esperanto was invented because Zamenhof, who was born in the multi-lingual, multi-ethnic Polish city of Bialystok, saw the language barriers in his own city as the primary source of distrust and misunderstanding between different ethnic groups. Thus, he resolved to create a lingua franca – an international language that could be used to promote peace and understanding around the world.

Not as Strange as it Sounds

Sound a little flimsy as a means of procuring international peace? At first I thought so too, but the reality is that as soon as the first book of Esperanto grammar was published in 1887, a lot of people got on board. Over the course of the next few decades, use of the language exploded, first in the Russian Empire and Central Europe, and then in other parts of Europe, the Americas, China, and Japan.

By 1915, Esperanto had gained so much traction that, following a report from the thirteenth World Congress of Esperanto in Prague, the Iranian delegation to the League of Nations proposed that Esperanto be officially adopted for use in international relations. The proposal very nearly changed the course of history, but was shot down by a single vote – that of the French delegate, who saw the Esperanto movement as a threat to French’s three-century old role as the international language of diplomacy.

After that, things took a turn for the worse. Although one of the foundational premises established during the first World Esperanto Congress is that the language exists purely as part of a linguistic movement and may have no other meaning ascribed to it, Esperantists soon started being persecuted in Nazi Germany, Francoist Spain (up until the 1950s), and the Soviet Union (from 1937 to 1956). Why? Well, for starters, many saw the internationalist nature of Esperanto as being aligned with anarchist antinationalist values. Hitler perceived the language as ‘Bolshevist,’ and, probably extracting from the fact that Esperanto’s inventor was a Jewish man, he even referred to Esperanto in Mein Kampf as an example of a language that could be used by an international Jewish conspiracy once they achieved world domination. Stalin, on the other hand, actually studied Esperanto, but in 1937, at the height of the Great Purge, he flip-flopped his views on the language and began persecuting its speakers, whom he referred to as members of an international spy organization disguised as the ‘Association of Soviet Esperantists.’

During the fifties, treatment of Esperanto and its constituents began to improve. In 1954, during the Montevideo Resolution, the UN granted support to Esperanto as an international auxiliary language – i.e. a language specifically meant for communication between people of different nations. Then, in 1999, William Auld received the first nomination for the Noble Prize in Literature for a work written in Esperanto. Since 2001, daily news on china.org.cn has been written in Esperanto, which is also used on China Radio International. The Vatican Radio also has a version in Esperanto, and there’s even a university – the International Academy of Sciences San Marino – where teaching and administration is conducted entirely in Esperanto.

Ok, this is all interesting, but English has been the international language of commerce, diplomacy, and tourism for decades, so why exactly should we care about a language made up by an eye doctor at the end of the 19th century?

Linguistic imperialism – that is, the imposition of one language on speakers of another – is one factor amongst many that contributes to economic inequality outside of English speaking countries. So you live in Peru and you want to be a scientist or engineer? Well, since academic research is published almost exclusively in English, you’ll have to learn how to read the complicated smorgasbord of a language first. Oh, you’re from a rural town and the English they taught there was substandard or they didn’t teach English at all? You’ll need to find the money to enroll in an English institute and devote two to three years to daily study, otherwise it looks like you’re fresh out of luck.

But it’s not all economic, either. Linguistic imperialism and cultural imperialism go hand in hand. So, if you’re from Germany and want to go on a trip to China, you’ll need to be sure to brush up on your English first, since that’s the language your tours will be offered in, that your hotel receptionist will probably speak, and that people on the street have a decent chance of understanding if you need directions on your way to the Nanjing Museum.

So, the thing about having a lingua franca that’s not a natural language like English is simply that it levels the playing field. Instead of everyone else in the world having to invest lots of money and study years and years to learn an extra skill that’s simply inherent to growing up in the United States, Britain, and a handful of other countries, if Esperanto were the international language, we’d all have to do a little bit of extra work in order to be a part of the global community.

And I do mean a little bit of extra work. Because according to various educators’ estimates, learning Esperanto can take anywhere from a quarter to a twentieth of the time required for learning other languages. Those estimates are backed up by a study done at the Institute of Cybernetic Pedagogy at Paderborn, which compared the length of study time it takes native French-speaking high-schoolers to obtain comparable levels of fluency in Esperanto, English, German, and Italian. The results? It took them around 2,000 hours to learn German, 1,500 to learn English, 1,000 to learn Italian (or any other Romance language), and…150 to learn Esperanto. Yes, 150 – I didn’t leave any zeros off.

According to Claude Piron, an Esperanto-activist and translator for the United Nations, that’s true because “Esperanto relies entirely on innate reflexes [and] differs from all other languages in that you can always trust your natural tendency to generalize patterns.”
And based on a quick read-up on the language, I’d say that’s true. Esperanto is completely phonetic, has simplified grammar, and a lot of vocabulary is created by simply combining roots with affixes. For example: lerni = to learn, lernejo = a school, lernejestro = a school principal. And those affixes can stand alone as well: ejo = place, estro = leader/head, and so on.

Okay but, ethical arguments and ease of acquisition aside, English isn’t going anywhere anytime soon, and the reality is that, in today’s world, Esperanto is simply not a very functional language. Well, that may not be exactly true – there is an argument for Esperanto’s functionality, it’s just not the usual one.

Studies done in New Zealand, the United States, Germany, Italy, and Australia have demonstrated that studying Esperanto before another foreign language expedites the acquisition of other languages. You could liken it to learning to play the recorder before the flute – as a grammatically simple and culturally flexible language, Esperanto introduces students to the principles of language learning without all the headaches inherent to learning natural languages, such as irregular verb conjugations or weird tensing rules. And, according to one study in which a group of European high school students studied Esperanto for one year followed by French for three years, these students ended up with a significantly better command of French than the control group, which only studied French all four years. To rephrase: students who studied Esperanto had better outcomes even though they only studied French three-fourths of the time that the control group did.

So, if you’re thinking about learning German or Italian or even Arabic, maybe try your hand at Esperanto for a few weeks first. If you get bored there, you can browse through the more than 250,000 Wikipedia articles written in Esperanto or go to one of thousands of Esperanto conferences held each year around the world. Who knows, you might even make a new Esperanto-speaking amiko – that’s Esperanto for, you guessed it – friend.