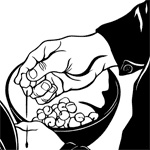 Over the past few days I managed to pack up all of my belongings into cardboard boxes, meticulously arrange them in a U-Haul truck, drive almost five hundred miles north, unload the truck, and then unpack everything. If nothing else, the ordeal made me think about process: the in between, the in-motion, the on going.

In my study I have a Nicki McClure print of a person pitting cherries. The hands hover between three bowls—one full of cherries waiting to be pitted, a small one filled with pits, and a medium one with pitted cherries sitting inside. A cherry is in the process of being pitted, the pit falling to the small bowl, the hands moving it toward the medium bowl, and in the top right hand corner of the print it says, simply, process. Some people have motivational prints about teamwork or looking toward the horizon of life, but I prefer this simple black and white reminder of the movement of life.

Process, as a noun and as a verb, originated in the Anglo-Norman and Middle French procés in the twelfth century as a term for a legal contract as well as advance, progress, course, development. General use of pruches, i.e., pruches de tans, course in time, was common in the thirteenth century, and the legal context of the word became common in the late thirteenth century in Anglo-Norman. As a narrative or an account of events, the Old French procés also originated in the late thirteenth century. The Anglo-Norman and the French, of course, stem from Latin, prõcessus, to advance, progress, the course or development of an action. It also meant a protuberance, an outgrowth.

One of the more interesting tidbits about the word is that in the Middle English, early Modern English, and Older Scots, process held a variable stress. Various 17th and 18th century poets like Milton often stressed the final syllable, process (as opposed to process) in order to more easily rhyme it with other words. I was unable to find any good examples of this variable stress, but I’ll take the OED’s word for it.

The etymology of any word is, of course, in process, which makes this exercise even more intriguing. Finding myself in the process of writing this post, trying to decide where it will end up, what I’ve learned about the word, I feel it is most apt to simply stop, to finish. After all, everything is always in process.