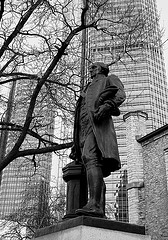 In his recent NY Times Op-Ed on Dignity, David Brooks stated that “the old dignity code has not survived modern life.”

“What I would say is that I’ve never had sex with another woman. Have I done stupid? I have.” –Mark Sanford (via Language Log)

Ah, just the kind of sub-literate and undignified statement that we’ve come to expect from governing officials. Maybe Brooks is correct to say that these public figures lack the “social norms to guide them as they try to navigate the currents of their own passions.”

But what exactly is the linguistic origin of dignity? While David Brooks searches for examples of it in the halls of government, I’m pretty sure that a little look-see at the OED will prove more fruitful.

The OED defines “dignity” as “The quality of being worthy or honourable; worthiness, worth, nobleness, excellence.” Etymologically, the word stems from the Latin dignitāt-em for “merit” and “worth,” and in the 12th century the word resurfaced in Old French as digneté and later in Modern French as dignité. One of the example quotations stood out to me in light of Brooks’ Op-Ed, “The real dignity of a man lies not in what he has, but in what he is” (John Stuart Blackie).

Brooks defines dignity by the person of George Washington, quoting Gordon Wood: “Washington became a great man and was acclaimed as a classical hero because of the way he conducted himself during times of temptation. It was his moral character that set him off from other men.” This code of dignity, he says, calls for its followers to place national interests above personal interests, to be dispassionate and reticent—all qualities which can be defined as honorable or excellent.

Do we have hope for a dignity-filled America? Brooks leaves us with a “maybe.” Perhaps President Obama will fill the shoes of America’s forefathers in that department, but maybe not. Maybe the only remnant of dignity will be preserved in the Oxford English Dictionary under the “D’s.”