Posted by Janet Barrow in Language Training on March 25, 2019 0 Comments 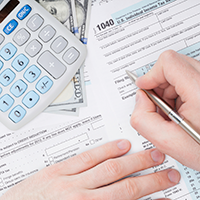 It’s everybody’s least favorite time of the year – tax season. If you’re trying to find the silver lining while navigating through what seems to be a never-ending labyrinth of numbers and headache-inducing terminology, read on. Because though tax forms may be boring and difficult, a lot of the language relating to finances is rich enough in history to make for cocktail-party-worthy linguistic anecdotes. Here are five of our favorites to give you something to munch on:

We’ll start off with probably the first word that comes to mind when we think about filing taxes – money. The word money is believed to originate from the name Juno Moneta, an epithet of the Roman goddess Juno. Juno Moneta was the protectress of funds, and as such, her temple, which stood atop one of Rome’s seven hills, was the location of ancient Rome’s mint – i.e. the place where money was produced.

Digging a little bit further, we find that Juno’s name is derived from that of an even older Etruscan goddess, Uni, which means ‘unique,’ ‘unit,’ or ‘the one.’ Meanwhile, Moneta likely comes from the Greek word moreres, meaning ‘alone,’ or ‘singular.’

Moneta eventually evolved into the modern English word money (and is also the origin for mint), but in many other contemporary languages, such as Russian and Italian, moneta (or moneda in Spanish) is the word for coin.

The word budget comes from the Latin noun bulga, which was a leather bag or knapsack. Bulga was modified to the Middle French bouge, whose diminutive form was bougette. A bougette was a small bag which tended to contain letters, news, tools, luggage, or goods to be sold. In the 15th century, English borrowed the word and rendered it bowgette. By the seventeenth century, it had settled on its contemporary spelling, budget.

In the seventeenth century, budget also started being used to refer to the contents of the bag, rather than the bag itself. Because newspapers and other news-related items had often been carried in budget bags, periodicals around the U.S. and Great Britain started employing the word in their titles: The Budget Opened, The Pall Mall Budget, The Mail Budget, etc.

The expression, “open your budget,” was soon popularized as a means of demanding transparency and fairness. It’s literally meaning was something along the lines of “show what you’ve got,” or “own up,” and thus it followed that publications like The Budget Opened were well-known for criticizing political leaders for, amongst other things, their tax proposals. Eventually, the word budget came to stand for the tax proposals themselves, and from there it wasn’t a far leap to begin applying the word to the financial accounts of individuals or families.

If you speak Spanish, you might already have an inkling that this word has some connection to… salt? Yes, that’s right, salt, or sal in both ancient Latin and modern Spanish. You can quit scratching you head, though, because the connection here is actually pretty straight-forward.

In Roman times, all the way up through the Middle Ages, salt was extremely valuable, owing to its important use in preserving protein-rich perishables, such as meat and fish. Salt was often referred to as ‘white gold,’ and so, fittingly, Roman soldiers were sometimes paid in salt rather than money. Their monthly allowance thus came to be called a salarium, or ‘a salt payment.’ The word later became salaire in French and salario in Spanish, and finally made its way into English as salary.

It’s been a long evolution from the original meaning of the word check to the meaning it holds today – that little piece of paper that inspires a smile every payday. And yet, thousands of years after its advent, check’s original use remains relevant and widely used, especially if you play chess. The linguistic ancestor of the monetary check is the chess check, which comes from the Persion word shāh, literally meaning ‘king.’ Back in the day, Persian players would say the word shāh to warn their opponent that their king was in danger. Anglo-French players later adopted the word, but said it eschec, which became chek in Middle English.

Check eventually came to signify a variety of things having to do with stops, restraints, or hindrances, much as the word implied in a game of chess. Later, it abstracted even further to include notions of accuracy, correctness, or verification. That’s where we get its verb form, as in ‘let me double-check,’ ‘checks and balances’ or the check (ticket) you receive when checking baggage.

In the early 18th century, the first money-related checks – detachable stubs retained by an issuer as verification of a transaction – came into use. Later, the check morphed into what we know it as today: a written order directing a bank to pay money as instructed. Check-mate!

Finally, we have the word fine – see what I did there? As you may have guessed, finally and fine share a common root: the Anglo-French fin or Latin finis, both of which mean ‘end,’ or ‘boundary.’

When it first entered the English language, fine was used to refer to various ends or limits, as in ‘the daie passed to the fine’ (Email Hausknecht, ca. 1450), or ‘All’s Well that Ends Well. Still the fine’s the crown. / Whate’er the course, the end is the renown’ (Shakespeare, 1604).

Starting in the 15th century, fine was used to describe a sum imposed as punishment for an offense, but between the 15th and 19th centuries, it was also a sum that could be paid in order to avoid a more severe punishment, such as imprisonment. This was the usage that popularized the phrase ‘to make fine,’ or to make the payment and thus avoid the punishment.

‘To make fine’ may also be the origin of the modern usage of the word fine as an equivalent of okay, or alright (i.e. ‘I feel fine’), since paying a fine would be a way of making oneself okay again in the eyes of the law.

If you’re interested in brushing up your own language skills, please visit our language training page or contact us for more information.