Posted by Jes Gearing in Etymology on September 22, 2009 0 Comments 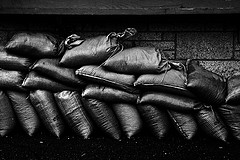 For those not in Atlanta and who have not heard any news about what is going on right now, we are in the middle of the biggest flood on record. Although it has been raining for over a week now in Georgia, over the past thirty-six hours more than thirteen inches of rain has accumulated in the metro-Atlanta area. Bridges have collapsed, several hundred people have been evacuated, major expressways are underwater (or under mud due to mudslides), and hundreds of thousands of people are without water. For a city fairly protected from the harsher elements—we rarely receive any snow, hurricanes, tornadoes, earthquakes, fires, etc.—this flood has put everyone in a rather apocalyptic mood.

Although parts of the city are in near-crisis situations, it does seem fitting to sit back and take a look at where the word flood comes from etymologically. The Oxford English Dictionary defines the noun as “the flowing in of the tide;” as “a body of flowing water; a river, stream, usually, a large river;” as, in a wider sense, “opposed to land, often contrasted with field and fire;” and finally as “an overflowing or irruption of a great body of water over land not usually submerged; an inundation, a deluge.” Interestingly, the first three definitions are related more to the property of water as different than land—i.e. the fact that water flows—than of an over-swelling of water, as would be our common definition today. I think I’m going to have to start using flood when I’m referencing a river in general, just to switch things up a bit.

Going further back to the 6th to mid 11th centuries in the Old High German, we find flout which manifested in the Middle High German (1050-1350 CE) vluot and then the German flut. In Old Norse, pre-sixth century CE, flood was flô(o with an ‘x’ above it) and in Gothic it was flôdus. Finally, the farthest flood can be traced is to the Old Teutonic flô (o with an ‘x’ over it) and the pre-Teutonic plōtús.

It is with the pre-Teutonic plotús that we see why the action of flowing is so important to the definition of flood. Plōtús comes from the Aryan verbal stem plō, “whence flow, in the primary sense, in accordance with the original function of the suffix -tu, is ‘action of flowing’, though the concrete uses are found in all Teutonic languages.”

I know this little etymology won’t help anyone stay high and dry over the coming days, but I hope it is interesting to know that flood holds so many benign connotations in addition to its overpowering one. Hopefully the rains will stop soon and the city will catch a breath of air from its swimming. Until then, just remember that flood originally refers to the action of flowing—gerunds are everywhere.