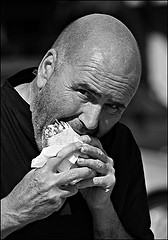 It’s hard not to have fun when newspapers roll out with brand new words like the 2008 recessionista , the “style maven with a budget,” or, more recently, the femivore, a stay-at-home mother who finds empowerment through feeding her family organic and locally sourced food. The latest neologism is hegan.

This week, the Boston Globe reports on the growing (or, at least, potentially growing) sector of middle-aged male vegans in the article, Men Leave Their Own Mark on Veganism . The piece explores the relationship several middle-aged men have to food and posits that while the idea of veganism is usually associated with twenty- or thirty-somethings (mostly women), there are more vegans that you think. The term vegan was coined by Donald Watson in 1944 as a term to limit the broader term of vegetarian:

Veganism is a way of living which excludes all forms of exploitation of, and cruelty to, the animal kingdom, and includes a reverence for life. It applies to the practice of living on the products of the plant kingdom to the exclusion of flesh, fish, fowl, eggs, honey, animal milk and its derivatives, and encourages the use of alternatives for all commodities derived wholly or in part from animals.”

According to the OED, a vegan is “one who abstains from all food of animal origin. A strict vegetarian,” but this definition leaves room for expansion. Many vegans abstain not just from food of animal origin—the meat itself, eggs, dairy—but also from honey, wool, and leather. Yes, honey—many vegans consider honey production exploitative, that the bees, who can feel pain and who are live animals, are mistreated through the process. Leather and wool, of course, fall into the same category—exploitation of live animals for human consumption.

So that brings us back to the hegans—what are they, anyway? They are men who “in their 40s and 50s embrace a restrictive lifestyle to look better, rectify a gluttonous past, or cheat death” And, according to the Globe, they’re here to stay.

One hegan, Joe McCain, said he “ate like an American”—everything “fried, fried, or fried,” but, after topping the scale near 300 pounds, he found he was unhappy with his appearance and health. On the advice of a childhood friend (a yoga instructor and vegan), he cut all animal products from his diet, started a yoga routine, and dropped sixty pounds in eight months. Another hegan, Eric Faulkner, said he switched because he was “scared to death of cancer.” He cooks for his family on a regular basis and has converted both his wife and daughter.

This mantra that “real men eat plants” is compelling—but how close to the truth is it? Are that many men switching to a plant-based diet? On the celebrity side of life, there are a few hegans out there, although the number of women vegans still outnumbers men. Recently Reuben Studdard, the American Idol judge and recording artist in his own right, lost over one hundred pounds on a vegan diet. Minnesota Twins baseball player Pat Neshek went vegan after breaking down with fatigue the end of his first season (2007). After switching diets, he saw his cholesterol drop and his energy and increase. Even Dennis Kucinich (Democratic Representative of Ohio) is a vegan—citing both ethical and health-related reasons.

The bottom line is that there are male vegans out there and that some, like Joe McCain or Eric Faulkner, are openly embracing it. Others don’t feel the need to associate with the labeling of veganism, declaring that it’s too restrictive and militant (think PETA). And there are no concrete numbers of vegans—male or female—available. One 2008 statistics lists 0.5% of people in the United States as vegan and 3% as vegetarian—definitely not the majority or even a strong minority, but a subculture in its own right.

For now there are hegans and everyone else. Will the term catch on? It’s up for debate, but some, especially business owners hope so—after all, isn’t every new fad a good thing for the books?