How Did the Months Get Their Names?

Posted by Janet Barrow in Etymology on January 15, 2020 0 Comments 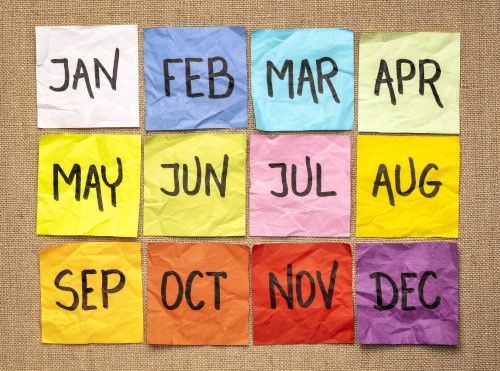 We mark time in many different ways – months, weeks, days, seconds. These terms get thrown around regularly, and they play a huge role in the way we conceptualize the many happenings of our lives.

Here we’ll take a look at each of the months and try to answer some fundamental questions about them: where do they get their names from, why are there twelve of them, why does the year begin in January, and more!

January is named after Janus, the Roman god of beginnings and endings. Janus presided over doors and gates, which feels appropriate for the new year. He is often depicted with two faces – one looking forward and the other looking backward. Notably, January was the last month to be added to the calendar, which originally had ten months and began in March.

February is named after a Roman purification festival called februa, which occurred around the fifteenth of this month. Februa literally means “month of cleansing” – a fitting title considering that February was once the last month of the year. Much like the New Year’s Resolutions of today, a “month of cleansing” seems like a good way to say goodbye to the old and usher in the new.

March is named after Mars, the Roman god of war. In ancient Rome, war was ceased during the time of celebration between the old and new year. Since March was the earliest part of the year when the weather was mild enough to begin waging war again, it was originally the first month.

There are a few different theories about where April gets its name. Some believe that April is derived from the Latin base apero – meaning “second” – because it was once the second month of the year. Others say it comes from another Latin word, aperire, which means “to open” and is suggestive of the opening of buds and flowers during springtime. Still others claim that April was named for Aphrodite, the Greek goddess of love, beauty, and procreation.

May is named for the Greek goddess Maia. She had a son, Hermes, with the god Zeus, and she was an earth goddess and a goddess of growth, which explains her connection to this springtime month.

June is named after Juno, the wife of Jupiter and queen of the gods. Juno was the patroness of childbirth and marriage, which is fitting for what has long been the most popular month for weddings.

July was the birth month of Julius Caesar, for whom the month was renamed following his death in 44 B.C. Previously, July was called “Quintilis,” which is Latin for “fifth” and referred to the fact that, with the calendar year beginning in March, July was the fifth month. July was also the first month to be named after a real person, rather than a Roman or Greek deity.

August is the only other month named after a historical figure – Augustus Caesar, who was the nephew of Julius Caesar and the first emperor of Rome. Much like July, August was previously called “Sextilius,” meaning – you guessed it – “sixth.” It was Emperor Augustus’ legacy which eventually gave rise to the adjective august, meaning “respected and impressive.” Additionally, July and August were both allotted thirty-one days to reflect the importance of the leaders that they represented.

September, October, November, and December come from the Latin words septem, octo, novem, and decem, meaning “seventh,” “eighth,” “ninth,” and “tenth.” Though their root meanings now make them feel out of place in the calendar year, prior to the addition of January and February, they were indeed the seventh, eighth, ninth, and tenth months.

The names of the months are all derived from three sources: Greek and Roman deities, Roman rulers, and numbers. Interestingly, though Julius Caesar made January the first month of the year with the implementation of the Julian Calendar in 709 BC, many places around the world continued to celebrate the New Year in March for centuries to come. In fact, England and the American colonies rang in the new year on the day of the spring equinox up until 1752, nearly two hundred years after most western nations adopted a January first New Year in accordance with Pope Gregory’s implementation of the Gregorian calendar (which is still the most widely used calendar today).

One final fun fact on the subject: The word “month” comes from the Proto-Germanic word for “moon.” Starting with the implementation of the Julian calendar, each month was intended to reflect a single lunar cycle. It was Julius Caesar’s astronomers who explained the need for twelve months plus the addition of leap year in order to synchronize with the seasons, which is why he elected to add January and February to the calendar. The word Monday shares a similar root, and literally means “day of the moon.”