The Patients Who Stay with You

Posted by Stephanie Wiley Cork in Interpreting on January 11, 2018 0 Comments 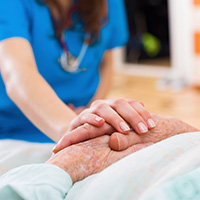 It’s been years since I’ve interpreted for Elena, but I can still hear her voice in my head. There are patients that just stay with you. Elena was in the hospital for weeks, and she memorized everyone’s names. Everyone’s. Every nurse, every doctor, every interpreter, every janitor, every physical therapist. She endeared herself to every person she met. She wasn’t allowed to have flowers in her room, so the staff kept them at the nurse’s station. There were so many arrangements it was almost comical. Sometimes, we’d wheel by them on the way from her room to hydrotherapy. Elena would say, “Mira a todas mis flores!”– “Look at all my flowers!” and a nurse’s head would pop up from behind all the balloons and bouquets and smile at her.

It’s difficult for me to understand how someone in such excruciating pain could be so joyful. She suffered severe burns on multiple parts of her body as the result of a traumatic accident. One burn was so deep that it went to the bone. I worked with her to talk to her doctors sometimes, but mostly I worked with her and her physical therapists during hydrotherapy.

The therapists would help her onto a large metal table with a drain at one corner and a lip around the circumference that prevented water from sloshing onto the floor. Then they would cut her bandages away, working methodically and slowly, careful to not inflict any more pain than necessary. They’d remove the last pieces of gauze to reveal open wounds, an entire piece of her body burned away.

The objective of this procedure, debridement, is to remove dead tissue and expose healthy tissue to encourage growth and healing. Therapists use water and metal instruments to scrape away at third-degree burns. They give pain medicine to take the edge off, but most patients still writhe in agony through the whole thing. As the therapists worked, every muscle in her body would go taut and she’d grit her teeth through the pain. Then the therapists would stop for a moment and she’d go limp, falling back onto the table exhausted. It reminded me of how women in childbirth fall back onto their beds between contractions.

Somehow, Elena still managed to crack jokes with Dan, the physical therapist’s assistant. “Make sure you do a good job washing my hair! Get all the shampoo out or I’ll find someone else to do it!” She said this with a grin and a wink. “Do you have a girlfriend, Dan? So handsome!” Once, we spent a few minutes talking about how Dan had taken a girl on a first date in the hospital cafeteria. It was a relief to interpret something that made us all laugh, because only a few minutes before I’d interpreted Elena screaming for the therapists to stop. There is something very draining about interpreting the exact tone of a patient in agonizing pain.

One Day I Broke the Rules

One day I broke the rules and offered her my hand to squeeze. I squatted down so that my face was level with hers and I stopped interpreting. I just talked to her about whatever came up. It was a desperate and probably futile attempt to distract her from what was happening. During a short break between the pain, she looked down at my hand and said, “You’re beautiful in your soul.” I felt my chest tighten, and they started scraping again. She dug her nails into my palm and I came away with four perfect little half-moons etched into my skin.

I remember that she asked that day about what had happened to the person responsible for her accident. She was worried that he was in jail. She was worried, she said, because she thought he had a family. “Espero que pueda regresar a su casa pronto”– “I hope he can go home soon,” she said.

It’s been years since I’ve interpreted for her, and I can still hear her voice in my head.