Posted by Manny Echevarria in Language and Culture on October 23, 2008 0 Comments 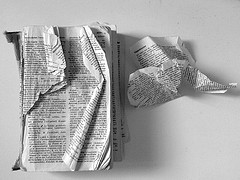 The issue of linguistic diversity is enmeshed in political debates ranging in topic from global economics to post-colonial nationalism. A common thread that runs through these discussions is the explosive growth of English language use over the last century.

The position of English today is truly unique; no language has ever been spoken by so many people in so many countries before. But, what does that mean for linguistic diversity? Does the rise of English necessarily spell doom for other languages?

Journalist, Christine Kenneally, recently wrote an excellent piece titled, How to Talk About English in English that explores the question.

Here is a brief excerpt to wet your whistle:

…The complicated reality of English today is obscured by simple storytelling in which it is the only main character. For example, the accelerating decline of languages all over the world is typically attributed to the global dominance of English. Yet linguist David Graddol says that the loss of linguistic diversity in the world began even before English became a powerhouse. According to Graddol, “the entire world language system is restructuring,” and English should be viewed as a player in this scenario, not the cause of it. Indeed, there is evidence that the widespread use of English actually boosts the growth of other languages. As English becomes a basic skill shared by all, the competitive edge it used to offer is lost, and other languages must be learned to gain an advantage. Finally, even though the global spread of a single language is an unprecedented phenomenon in the history of all language, English may ultimately be just the first instance of this: Mandarin and Spanish are beginning to dominate in different regions, and Arabic is currently the world’s fastest-growing tongue.