Posted by Jocelyn in Interpreting, Language and Culture on November 24, 2008 3 Comments 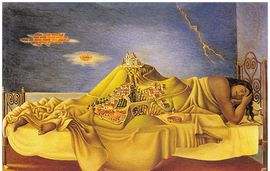 La Malinche, Doña Marina, La Chingada. No matter what name you use, there is no doubt that she is one of the most influential interpreters in history.

Doña Marina, who came to be known in Mexico as La Malinche, was born the daughter of a cacique during the rule of the Aztecs in the early 1500s. As the daughter of a cacique, she was considered part of the noble class and allowed the opportunity to attend school. Not much else is known about her early years except that her father died and she was sold into slavery (it is not known whether she was sold by her family or kidnapped and then sold), eventually ending up in the hands of Hernan Cortes and the Spaniards during their conquest of the Aztecs.

It is also not known how Cortes became aware of Malinche’s linguistic skills, but within a few weeks of being sold to him she had begun interpreting. In one of the first documented incidences of relay interpreting, La Malinche and a Spanish priest named Gerónimo Aguilar worked as a team to interpret for Cortes by transferring Nahuatl (the Aztec language) to the Chontol Mayan language to Spanish.

They continued this practice until La Malinche was able to learn Spanish and interpret directly from Nahuatl to Spanish for Cortes. Bernal Diaz del Castillo, an eyewitness to Malinche’s skill as an interpreter, stated that “Without the help of Doña Marina, we would not have understood the language of New Spain and Mexico.”

One could argue that without Doña Marina serving as his interpreter and enabling him to communicate with the Indians, Cortes may not have been able to defeat the Aztecs, or at the very least, not as readily.

La Malinche was the mother of Cortes’ first son, who is considered to be one of the first Mestizos (a person of mixed European and American indigenous ancestry). Several accounts indicate that La Malinche was also responsible for foiling more than one Aztec plan to attack Cortes and the Spanish army. Her various roles as interpreter, Cortes’ mistress, and informant, led to the less desirable labeling of her as “La Chingada” by modern Mexicans.

La Chingada can be translated to “the fucked one.” Mexicans sometimes refer to themeselves as “Hijos de La Chingada,” or quite literally, as the bastard children of the sexual union between Cortes and La Malinche. One can see the complicated aspects of La Malinche’s contribution to Mexican identity, which was most famously explored by Nobel laureate, Octavio Paz.

Understandably, many Mexicans regard La Malinche as a traitor. Her role as an interpreter has often been sullied by this perception. She has become the embodiment of the famous saying “Traduttore, traidore.”

Whether you see her as a victim of circumstance, a brilliant survivor, or as a traitor, there is no disputing that her language interpreting skills helped to seal her role in history forever, as well as the fate of the Aztec Empire. Her story, in part, serves to illustrate the importance that interpreters can play in shaping history, as well as the price that they sometimes pay when they do so.
_______________________________