Does language change how you perceive colors?

Posted by Janet Barrow in Language and Culture on March 26, 2020 0 Comments 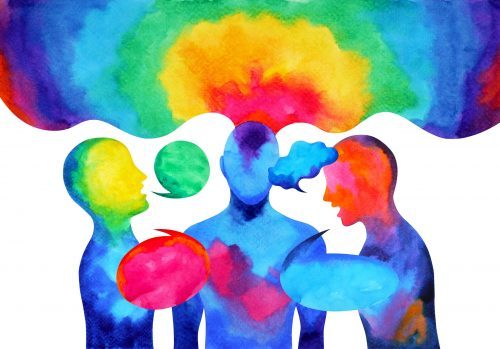 If you look at a color spectrum, you will find the number of colors is infinite. The spectrum has no end or beginning, and there is no limit to the number of gradations that exist. When an English speaker looks at that spectrum, however, they tend to identify 11 broad color categories: black, white, yellow, green, red, blue, pink, gray, brown, orange, and purple.

If you’re an interior designer or a painter, you might also be able to identify colors like cyan or sapphire, but they are still usually thought of as specifications within the fixed eleven: both are shades of blue. To a Russian speaker, however, cyan and sapphire do not fall within the same broader category. Cyan would be instead a type of goluboy (light blue), while sapphire would be a type of siniy (dark blue).

It was once thought that the number of categories a language uses to define colors determines its speakers’ ability to distinguish between those colors. This hypothesis was soon debunked, and it’s easy to understand why. English may not have two different words for dark versus light shades of blue, but English speakers are certainly able to distinguish between the two. A less extreme version of the hypothesis, however, may hold some water.

In a 2007 study, scientists at Stanford had English and Russian speakers look at a computer screen where an image was shown of three blocks stacked in a triangle. The top block always matched one of the two bottom blocks, and all blocks appeared in one of twenty different shades of what an English speaker would call blue, and what a Russian speaker would call either goluboy or siniy. Subjects were asked to hit a button once they had identified the matching block. The results showed that Russian speakers could distinguish between dark and light shades of blue 10% faster than English speakers could. This suggests language categories do indeed affect color perception, at least to a minor degree.

In fact, our perceptions of color may change over time if there is a change in linguistic environment. In Greek, as in Russian, there are two different terms used to describe light and dark blue. However, one study showed that after living for long periods of time in the United Kingdom, where English lumps ghalazio and ble into the larger category of blue, Greek speakers begin to see these two colors as more similar.

How does color enter language?

When we consider the differences in color categories across languages, the way we divide up the color spectrum may seem rather arbitrary. And in fact, this was believed to be the case until a groundbreaking study done by Brent Berlin and Paul Kay in 1969. Their research showed that colors enter language in a fixed order. If a language only has two color terms, they will equate to ‘black,’ or dark hues, and ‘white,’ or light hues. This doesn’t mean speakers of such languages are unable to see the full spectrum of colors. But their categories are broader than ours. The third color to enter language is always red, which may include colors that are further delineated in English, such as orange. Next follows either yellow or green, with the other being the fifth term. So, if a language has just five color categories, they will always be black, white, red, yellow, and green. Finally, blue and then brown enter the color lexicon.

Most languages have between two and eleven basic color categories. And yet, some – including Bellonese, Mursi, Pirahã, Warlpiri, Kalam, and Yele – have none. Rather than using color as a principal category for dividing up the world, they focus on other characteristics, such as pattern, ripeness, brightness, translucence, humidity, shape, or location. Where an English speaker might say, “I hate brown bananas,” they might say, “I hate ripe bananas,” or, “I hate soft bananas.” It’s not that they are unaware that a ripe banana is brown, but that color is not the preferred method of interpreting the physical world.

Language as a focus, not a limit

When the theory of linguistic relativity was first developed in the 1920s, it suggested that language places limits on what we are capable of understanding and conceptualizing. That hypothesis has been rejected in favor of another: language does not restrain us, but rather creates categorical patterns of focus. For example, in Spanish, it’s impossible to render the sentence, “My friend is coming over,” without specifying the gender of that friend. People, as well as objects, are inextricably linked to gender. Since both are prominent features of any language, gender thus becomes a categorical focus for speakers of Spanish. Similarly, in English, all sentences are produced with a time marker. I either have to say, “My friend came over,” “My friend is here,” or “My friend is coming over.” In Chinese, and other languages that mark time not with tense changes but with time phrases, such as ‘yesterday,’ ‘in an hour,’ or ‘next year,’ the topic of time can just as easily be included as excluded from a conversation.

In the same way, color is a category that is used in varying degrees to classify experience and perception. In languages such as English, which uses all 11 basic color terms, color seems to be more central to our experience. Compare that to speakers of languages like Mursi or Yele, where color terminology does not exist despite speakers’ ability to see different colors. Language, it’s becoming clearer, affects where our attention is drawn to, not what we are able to perceive, understand, or conceptualize.