Posted by Jes Gearing in Language and Culture, Uncategorized on October 7, 2010 0 Comments 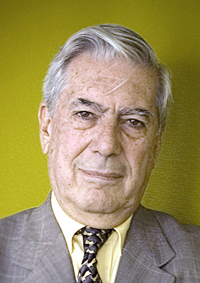 Every year the Nobel Prize in literature is awarded “to the person who shall have produced in the field of literature the most outstanding work of an idealistic tendency” by the Swedish Academy. Considered to be the most prestigious award in literature, this year’s prize was given to Peruvian writer Mario Vargas Llosa, an author most notorious for his novels and essays attacking South American political corruption — as well as his run for President of Peru in 1990 as a member of the FREDEMO coalition which emphasized the need for a market economy, free trade, and the dissemination of private property.

Awarded for “his cartography of structures of power and his trenchant images of the individual’s resistance, revolt, and defeat,” the prize bestows $10 million SEK (Swedish krona) to Vargas Llosa, and culminates his literary life which began in 1963 with the publication of his first novel The Time of the Hero. In challenging the inadequacies of Peruvian society, many of Vargas Llosa’s works heroize the individual’s struggle for freedom from oppressive regimes. His earlier works focused mostly on Peru: The Time of the Hero (La ciudad y los perros), The Green House (La casa verde), Conversation in the Cathedral (Conversación en la catedral), etc. Many of his later works, however, explore other areas of South and Central America: The War of the End of the World (La guerra del fin del mundo), a novel set in 19th century Brazil; The Feast of the Goat (La fiesta del chivo), a novel based on the life of Rafael Trujillo, the dictator of the Dominican Republic form 1930 until 1961.

The Feast of the Goat is heralded by critics and readers alike as one of his greatest accomplishments, blending historical truth with fiction. The novel catalogues the despair felt by many within the Trujillo regime — from the families of the men methodically murdered for plans of revolt to Trujillo himself, and the thoughts he must have had before his assassination.

Translated from Spanish into more than thirty-one different languages including Arabic, Chinese, and Croatian, Vargas Llosa’s novels, essays, and plays have influenced countless writers, and they’ve served to contextualize complicated topics in South and Central American society and politics. Now, with the Nobel Prize under Vargas Llosa’s belt, commentators will likely claim more than ever before that Vargas Llosa put “Latin American literature back on the map” — even if we happen to think it never really left the map.

We highly recommend the excellent English translations by the prolific Edith Grossman.