Posted by Jes Gearing in Translation on December 28, 2009 0 Comments 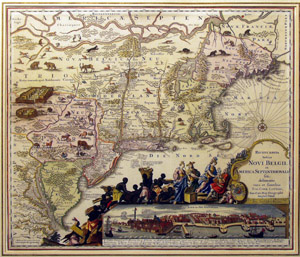 New York—home of the Big Apple, the state of opportunity, a region far more diverse than many others—is more than just New York City with its Chinatown, Little Italy, and the Bronx, a place peopled by hundreds of different cultures—it is also the historic New Netherland, the remainder of a large and powerful Dutch colony with a largely heterogeneous society. While many of the European colonies in the New World were peopled by one or two major cultural groups, New Netherland was always a place of diversity. Anyone who came to live in New Netherland—Europeans, South Americans, Africans, Caribbeans, and the Native Americans already living in the region—was considered a Dutch New Netherlander.

Although Dutch was the lingua franca of the colony, several Algonquin languages, German, Scandinavian languages, French, English, Portuguese, Spanish, Ladino, and Hebrew were also commonly spoken. Much of the diversity of the colony is due to the open religious attitude of the colony. The Dutch West India Company declared the Reformed Church the official religious institution of the colony, in opposition to the Union of Ultretch which stated that “everyone shall remain free in religion and that no one may be persecuted or investigated because of religion,” but courts in the colony upheld the original religious freedom by granting residency for Ashkenazi and Sephardi Jews and Quakers.

Today, much of the legacy of New Netherland’s diversity and openness is being translated by Charles T. Gehring and the New Netherland Project. Although the colony only lasted until 1674 when the Dutch relinquished the colony to the British after the Second Anglo-Dutch War, over sixty years of seventeenth century Dutch texts have been waiting to be translated and brought to English scholarly awareness. For the past thirty years, Gehring has been painstakingly transcribing, analyzing, and translating over 12,000 pages of water and fire stained Dutch records.

A fire in 1911 singed many of the pages and the first set of translations was lost in the fire. Starting from scratch, Gehring has completed over 8,000 pages to date. Russell Shorto , author of The Island at the Center of the World, explained the Dutch colony’s influence:

It was a place that people fled to in the great age of religious warfare; it was a refuge. At the same time, they were known for free trade; they developed a stock market — and those things, free trade and tolerance, are key ingredients of New York City.

Once Gehring’s translations are completed, scholarly work on American beginnings will have a completely new set of material to work with. As Gehring said, “What you find out is how deeply the Dutch cast roots here and how much of their culture they transmitted to this country.” Much of what we consider to be American may actually be Dutch, and a better understanding of that history is exactly what Gehring and his associates are interested in.

To find out more about The New Netherlands Project, visit their website here .