O Rio? 4 Places in the Americas Named By Mistake

Posted by Paul Sutherland in Language and Culture on August 17, 2016 2 Comments 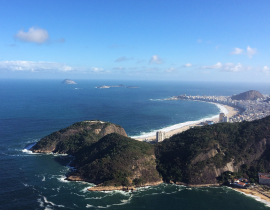 Rio de Janeiro’s time in the global spotlight is nearly over. Rio, one of Brazil’s jewels — world heritage site, protected by Christ the Redeemer, so named for its grand river that … wait, what? Yes, its explorers mistook its harbor for a river mouth, and their mistake is now etched in history. Toponymy (the study of place names) is a fascinating field that can give us clues as to what people in the distant and not-so-distant past thought about the area, how they interacted with it, and when they just couldn’t get it right.

For a short time the home of a lucrative (and tragic) gold rush, Nome likely did not come from an Alaskan Native word but from a typo. The theory goes that when a British cartographer saw “? Name” scrawled as an annotation on a chart, he misread this as “C. Nome”, or Cape Nome, which it is today known as in full.

Colorado was originally going to receive this name, invented by George Willing and claimed to be a Shoshone word meaning “gem of the mountains”. Now one and a half million people — including some Shoshone — live in a state possibly inspired by a girl George liked called Ida.

The archipelagoes of the Caribbean, and the continental land masses just past them, were famously thought by Columbus to be India. This is in hindsight a fair assumption, as India was near the edge of the known world east of Europe at that point. However, what’s entirely silly and unforgivable is that if it had been part of India, it was clearly the eastern side of India. East Indies.

This is a bonus one: soundly named, but a bit goofy. Both islands were named for the Spanish word ‘bearded’, either for the immense beards of its indigenous people or the appearance of fig trees.