Posted by Manny Echevarria in Language and Culture on January 25, 2010 0 Comments 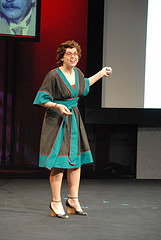 I was first introduced to Erin Mckean through her 2007 TedTalk on the work of lexicographers, and I’ve been a big fan ever since. Her sense of humor, wit, and effervescence when writing or speaking about language are contagious, and although she is playful, her work is attempting to do something serious: to change the common perception that people have about the relationship between authority and language. I was reminded of this yesterday when I stumbled upon her Boston Globe article on Sweet Tooth Fairies, three word phrases that contain separate two word phrases such as, periodic table manners, victory lap dance, and unrequited love handles.

While many linguaphiles would simply revel in the wordplay for a bit and then move on, Mckean looks more deeply at the pleasure we take from these fun word combinations to make a point about the elasticity of language — it’s ability to wiggle out of the rigid categories that authoritative figures attempt to prescribe to English speakers and writers. As she explains, “by putting words into an unaccustomed double role, they let us see ordinary English words for the truly versatile actors they are.” For our part, many users of the English language have been conditioned to look towards the authority of linguists for the right answers to every grammar, spelling, or usage issue. Recent popular works such as Jack Lynch’s The Lexicographer’s Dilema, and Mckean’s new innovative online dictionary, Wordnik, are making strides to change this perception.

On top of being one of the youngest ever editors-in-chief of The American Heritage Dictionary, Mckean writes a popular fashion blog called A Dress A Day, and she is the creator and CEO of Wordnik. Wordnik is a combination social media site and language resource that works together with Twitter and Flickr to give users the chance to create posts on, and take part in the definitions of the words they use; again, placing more of the authority into the hands of speakers and readers. Here is an excerpt from the site:

Traditional dictionaries make you wait until they’ve found what they consider to be “enough” information about a word before they will show it to you. Wordnik knows you don’t want to wait—if you’re interested in a word, we’re interested too!

By “information,” we don’t just mean traditional definitions (although we have plenty of those)! This information could be:

The following from a 2009 TED Blog interview is a nice distillation of Mckean’s idea for Wordnik:

Brilliant people come to me and say, “Is this right, or this?” And then I’d give them the evidence on both sides and say, “Now, make up your own mind.” And they’d say, “No, I want the answer.”

Now, these were people who would never consider doing this in any other area of life…Whether words are right or wrong can vary according to use. I might say to a friend , ‘That movie was awesomepants!’ But I would not lead into a movie review in The New York Times with the word awesomepants. That would be inappropriate. People expect that one size fits all with words, when that doesn’t work in any other area of their lives. I hope that we can change that view.

Here is the complete compilation (over 2000 and counting) of Sweet Tooth Fairies on Wordnik.