Presidential Rhetoric at the 2012 RNC and DNC

Posted by Maria Khodorkovsky in Language and Culture, Uncategorized on September 11, 2012 0 Comments 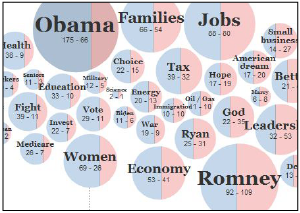 During this election season, American presidential hopefuls will raise and spend some 6 billion dollars, according to experts. No less important, the presidential campaigns of Barack Obama and Mitt Romney will spend countless words to woo the electorate, relying on many familiar rhetorical tricks of the trade. To examine one of those devices – repetition – the New York Times has created a chart of the most frequently used words at the Republican and Democratic National Conventions that took place earlier this month. Drawing from transcripts of the Federal News Service, this chart offers us a lot in the way of understanding both parties’ proclivities and priorities.

According to the chart, the candidates’ names took center stage. President Obama’s name was the Democrats’ most frequently uttered word, beating out “families”, “jobs”, and “economy.” Republicans, too, missed no opportunity to extol the virtues of their nominee. Many a handbook about interpersonal relations will teach that repeating someone’s name throughout the course of a conversation garners positive feelings and helps with name recall. While the American public is no danger of forgetting the names of the two most prominent men of the moment, hearing their names couched in the complimentary glow of their parties’ conventions fosters a link between the rosy promises offered and the name of the “right” man for the job.

The timbre of the language used, though, marks a distinction between the conventions. Many of the Democrats’ most popular words denote a fighting spirit: Relying heavily on the words “forward”, “fight”, “war”, “veteran”, “military”, and “invest”, Democrats attempted to harness the vigor of verbs to show that they are a party of action and results. Republicans opted for more future-oriented language, capitalizing on the words “better”, “success”, “hope”, and “American dream.” Doing battle against an incumbent president, Republicans chose to distance themselves from the problems of the present by painting a picture of the America they envision with Mitt Romney in office.

Many of the word-choices pointed out in the New York Times chart are self-evident and far from surprising: Democrats lambasted millionaires and voiced support for the middle class (a 7:0 and 47:7 ratio between the two conventions); Republicans emphasized unemployment and government spending (17:1 and 66:13, respectively, in favor of the GOP). In the end, both parties are faced with the same political, social, and economic issues that concern Americans. How they choose to go about resolving them, though, can be elucidated to a degree by their language of choice.

—
Graphic by The New York Times