International Claus: Santa Traditions from Around the World

Posted by Danielle Martin in Language and Culture on December 23, 2019 0 Comments 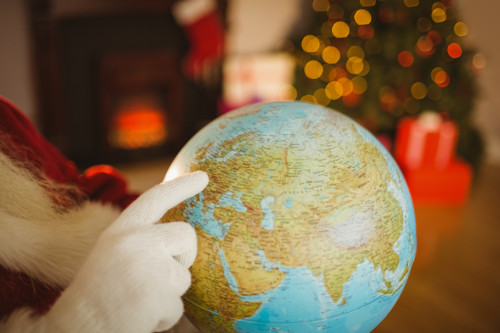 The modern American portrayal of Santa Claus grew out of traditions surrounding three historical figures: Saint Nicholas of Myra, 16th century Britain’s Father Christmas, and the ancient Germanic god Woden. They hold differing levels of influence in modern Santa Claus-related festivities around the world, and knowing their stories should help clarify Santa’s country-by-country gift-delivery schedule, his varying attire, and how he settled on such an unconventional mode of transportation.

The name Santa Claus is a phonetic transliteration of the Dutch name ‘Sinterklass,’ a Santa-esque character based on the historical figure of Saint Nicholas of Myra. Sinterklass’ namesake was a fourth-century Christian bishop who lived in modern-day Turkey and was famous for his generous gifts to the poor. During the Middle Ages, Saint Nicholas was commemorated by giving gifts to children on the sixth of December, which was the date of his death in 343 A.D. During the Reformation, however, opposition to the veneration of saints led Martin Luther to suggest Christmas as an alternative day for gift-giving.

Still, the celebration of Saint Nicholas Day on December 6th remains popular throughout much of Europe, allowing Santa to get a few of his deliveries out of the way before the Christmas rush.

By the time of Henry VIII’s reign during the 16th century, St. Nicholas day was no longer celebrated in England. Instead, Father Christmas – a man in green or scarlet robes lined with fur – emerged as an emblem of good cheer who was charged with spreading joy on Christmas day. His physique was originally quite variable, with one famously trim illustration of him being John Leech’s “Ghost of Christmas Present,” which appeared in Charles Dicken’s classic novel, “A Christmas Carol.”

Prior to Christianization, pagan people in the Germanic regions of Europe celebrated a midwinter event called Yule, which was a period of increased supernatural appearances. Yule included the Wild Hunt, a ghostly procession across the night sky. The leader of the Wild Hunt was the god Woden (Odin in Norse), who wore a cloak and a long white beard, delivered gifts to his followers, and rode on an eight-footed horse named Sleipnir. With the Christianization of Europe, many Yuletide traditions were absorbed into modern Christmas celebrations, and it is widely believed that we have Odin to thank for elements of Santa’s classic look as well as his preferred mode of transportation.

With these three predecessors in mind, let’s take a look at modern-day Santa as he travels around the world, delivering presents and shape-shifting as he goes.

In Russia, Santa is truly a man of his climate. Ded Moroz translates to “Grandfather Frost,” a man known for dressing carefully and protecting himself from the elements. His tall valenki (leather boots) keep his toes safe from frostbite, and his long, Russian-style coat keeps him warm in the frigid temperatures. Ded Moroz typically delivers gifts on New Year’s Eve, with the aid of his three powerful horses.

Christmas falls during the summertime in Brazil, so Papai Noel, or “Father Noel” must shed some of his layers as he moves down into the Southern Hemisphere. Instead of a heavy winter ensemble, he dons his classic-red and white look in silk, so that he can stay cool and fresh while making deliveries. On Christmas Day, he diligently places his gifts under brightly-shining trees, fashioned entirely from electric lights.

Moving back north to the slightly chillier country of Croatia, Santa becomes known as Djed Božićnjak, or “Father Christmas.” Croatians also sometimes call him Djed Mraz, which is a Croatian translation of the name of Russia’s Santa figure, Ded Moroz. Families in Croatia celebrate in different ways: Some open gifts on St. Nicholas Day in early December, while others wait until Christmas Day.

Typically, Croatians don’t hang Christmas stockings as receptacles for gifts. Instead, children place their shoes on the windowsill to be filled with special treats.

St. Nicholas Day is also celebrated on December 6th in Hungary, where Santa Claus goes by just one name: Mikulás. As in some of the other traditions we’ve seen, Mikulás is a jolly figure known to bestow ample gifts on children with excellent behavior. Those with bad behavior, however, may receive a tightly-bound bundle of twigs in lieu of any presents.

As in Croatia, children use real shoes instead of stockings. However, instead of putting them on windowsills, they set them outside their doors the night before St. Nicholas Day. And they use boots – just to be sure there’s enough room for all their treats!

ALTA Language Services is proud to celebrate the unique cultural heritages and languages of nations around the world. If you are interested in learning another language, or if you’re looking for translation or interpretation help, please contact us for assistance.

About the author: Danielle Martin has taught multiple subjects to students in three different states. She previously spent time as a literary agent’s assistant and video editor. Danielle writes about education, business, health, and lifestyle topics, and she also enjoys writing fiction.