How Does the Sound of a Word Relate to Its Meaning?

Posted by Janet Barrow in Language and Culture on February 3, 2020 0 Comments

In psychological experiments first conducted in 1929 and then repeated in 2001, scientists asked a group of individuals to give a name to two unnamed shapes. The scientists were trying to determine whether the names for these shapes would be arbitrarily selected by the participants or if there was a more intuitive process behind the way we use language.

Take a look at the image below. Let’s say that one of the shapes is named Bouba and the other is named Kiki.

Can you guess which is which? 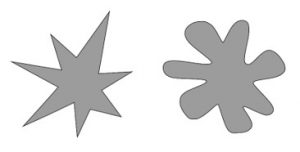 If you answered that the pointy shape is named Kiki and the rounded shape is named Bouba, you’ve got the same idea as 95-98% of people around the world! The answer to this question may have felt obvious to you. That intuitiveness, in and of itself, is a linguistic marvel. It violates a principal that, for centuries, was considered one of the defining features of human language: arbitrariness.

What is meant by arbitrariness is that, across languages, the sounds that make up a word have nothing to do with the meaning of that word. There is nothing corny, for example, about the combination of letters and sounds used to produce the word corn. This is why many different combinations of sounds can be used to represent the same idea from one language to another – corn becomes maiz in Spanish, kukuruz in Croatian, or majs in Swedish. Thus, the relationship between sound and meaning is arbitrary.

There are a few exceptions to the arbitrariness principle. The main one is onomatopoeia – words like crash or bang or woof, which are meant to imitate the sounds they represent. Though in English, roosters wake farmers with cries of cockadoodledoo, in Spanish they cry out kikirikí. Similarly, while pigs say oink in English, they say bubu in Japanese. These differences show that, although onomatopoeic words bear some resemblance to the sounds they symbolize, they are also influenced by culture.

Before the first version of the Kiki/Bouba experiment was first performed by German-American psychologist Wolfgang Köler in 1929, virtually nobody had been able to challenge the arbitrariness principle. Nowadays, though, neurologists are beginning to play with the idea that synesthesia – a process which involves the crossing of different senses – may be a core part of the human experience. This directly relates to why we see Kiki as spikey and Bouba as rounded. You’ve probably heard of synesthetic people who perceive letters and numbers printed in black as if they were written in different colors, or who associate tastes with shapes. But scientists are beginning to believe we all experience synesthesia to some degree. Some synesthetic notions even become embedded in our cultures over time, which is the reason that we can understand the idea of, for example, a ‘sharp’ cheddar cheese.

In the case of Kiki/Bouba, there may be some crossover in the sensation of physically producing the two words and the shapes we associate them with. When you say Bouba, you purse your lips and your mouth becomes rounded. When you say Kiki, you pull your lips into more of a taut, angular shape. In terms of the position that your mouth takes on when you produce either of these words, Bouba is more similar to the rounded shape, while Kiki is more similar to the pointed shape. In this way, the Bouba/Kiki Effect violates the arbitrariness principal.

Some scientists have begun looking for more examples that defy the arbitrariness principle. One way to do this is searching for similarities in the sounds used to represent concepts across different languages. There are many reasons we see sound similarities from one language to another. Words like language, langue, and lingua are similar because they share a common ancestor. Other words, like coffee and tea, are similar across languages because they were once traded goods – the people and cultures trading them had extensive contact and, for ease of communication, used the same words to refer to their products.

Language scientist Damian Blasi helmed a study that analyzed lists of basic words – including the names of body parts, natural phenomena like leaf and star, pronouns like I, you, and we, and adjectives like red – from 4,298 of the world’s 6,000-odd languages. The study found much more consistency than expected across languages, even when controlling for those factors that often lead to cross-linguistic congruities. The word for nose, for example, tended to include either an ‘n’ sound or an ‘oo’ sound, no matter the language. Similarly, the concept round was usually conveyed via a word that included an ‘r’ sound. In fact, nearly one third of the one hundred concepts tested showed more similarities across language than the arbitrariness principal would lead us to believe.

So, what’s going on here? It seems that sensory crossover is at work again. A nasal ‘n’ sound used to describe a nose is a perfect example of this. Similarly, it’s been demonstrated that people routinely associate darker colors with lower sounds and lighter colors with higher sounds, and that we tend to relate nouns with long vowels to longer objects and nouns with short vowels to short objects. Ultimately, some sort of synesthesia-like mapping can be used to account for many of these linguistic oddities and unexpected language similarities.

As suggested by noted neuroscientist V.S. Ramachandran, the practice of creating sound symbols that are not arbitrarily related to the object that they refer to might have begun when our pre-human ancestors first began creating language. As vocabularies grew and became more complex, the practice was largely abandoned, but the similarities we see – especially across basic, relatively universal language concepts – may actually be the vestiges of some ancient proto-language. And the instinct for non-arbitrarily relating sounds to meanings seems to have been left at least partially intact, as demonstrated by the Bouba/Kiki Effect.