Why is Spelling So Confusing in English?

Posted by Janet Barrow in Language Training on February 1, 2019 0 Comments 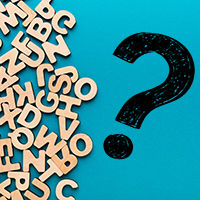 English is often said to be one of the most difficult languages to learn. But why? Well, for starters, English is not phonetic, meaning that there is not necessarily a direct relationship between the way that a word is spelled and the way that it is said. If this comes as a surprise, consider the following poem, written in 1902 by Lord Cromer:

Our Strange Lingo
When the English tongue we speak
Why is break not rhymed with freak?
Will you tell me why it’s true
We say sew but likewise few?
And the maker of the verse
Cannot rhyme his horse with worse?
Beard is not the same as heard
Cord is different from word.
Cow is cow but low is low
Shoe is never rhymed with foe.
Think of hose, dose, and lose
And think of goose and yet with choose
Think of comb, tomb, and bomb,
Doll and roll or home and some.
Since pay is rhymed with say
Why not paid with said I pray?
Think of blood, food and good.
Mould is not pronounced like could.
Wherefore done, but gone and lone-
Is there any reason known?
To sum up all, it seems to me
Sound and letters don’t agree.

It’s important to clarify that the idea isn’t that there is no relationship between letters and sounds, but that the rules governing pronunciation are so complex and so riddled with exceptions and irregularities that written and spoken English start to look like distant relatives rather than identical twins.

What About Other Languages?

In general, how phonetic an alphabetic language’s spelling is varies widely, with languages like Maltese, Finnish, Albanian, Georgian, Turkish, and Spanish being highly phonetic, languages like German, Hungarian, Portuguese, and modern Greek being somewhat phonetic, and English being highly non-phonetic. Interestingly, most phonetic languages lack a verb corresponding to the English ‘to spell’ because the act of spelling out words is rarely needed, since most words are spelled exactly as they sound. This is probably why, for most Spanish speakers, the idea of a high school spelling bee sounds downright absurd, or why in Italian, wherein spelling is queried, ‘Come si scrive,’ or ‘How is it written,’ the question is usually answered by pronouncing the word syllabically (i.e. cioccolato, or ‘chocolate,’ would be spelled cioc-co-la-to).

But since English, like its relative languages such as Afrikaans, German, and Spanish, is written using the Roman alphabet, what has led it to become one of the least phonetic modern alphabetic languages?

The Birth of English

The oldest form of English originated from dialects of the West Germanic language Anglo-Frisian, which was brought to Britain between the 5th and 7th centuries by Germanic settlers. It was originally written using a runic script, but in the 9th century, a group of Irish missionaries introduced the Roman alphabet, and English took on more or less the same alphabet that we use to write it today. By that time, much of Britain had already been converted to Christianity, and since the religion was practiced exclusively in Latin, a large number of Latin words, such as the predecessors of the modern words priest, paper, and school, had already begun to enter into English vocabulary.

Starting in the 8th century, many parts of Britain were raided and conquered by Vikings and other Scandinavian groups, who spoke varied dialects of Old Norse. Old Norse was somewhat related to Old English, but possessed many grammatical differences, and it is thought that during the intersection of these two languages, English lost the practice of grammatical gendering that remains present in modern German. Still, from the time that Old English was written using the Roman alphabet (9th century), it was more or less phonetic. It wasn’t until the Middle English period that written English got completely turned on its head.

In 1066, the Norman Conquest took place, and Norman French replaced English as the language of the higher classes, although English remained the language of the common people. During this period, about 10,000 French words entered the English language, most of them relating to government, church, law, the military, fashion, and food. The problem is that most of these words retained their French spelling, and since French abided by its own pronunciation rules, which were different from those of English, things started to get pretty confusing.

After the Normans lost most of their lands in England, English began to be adopted once again for both official and literary use. Then, in 1473 William Caxon set up a printing business and printed the very first book in English, The Recuyell of the Historyes of Troye. Exciting, right? Well, kind of. Since many of the printers Caxon hired were from the Low Countries, and therefore unused to the English language, they made a lot of spelling mistakes, such as writing any instead of eny, and busy instead of bisy. They also sometimes used Dutch spellings, wherein they’d add an h after a g, turning words like gost into ghost. And, since they were paid more to print more, they also tended to add random letters to words, making a lot of simple and straight-forward spellings downright confusing (i.e. frend became friend, hed became head, seson became season, etc.)

During the Reformation, the first Bibles also began to be printed in English. This was regarded as heresy, since the Christian church still conducted all of its activities in Latin, and so most of the time English Bibles were printed overseas to avoid prosecution. As you can imagine, this only added to the diversity of spellings, and since there were no dictionaries and few books in general, people usually accepted whatever they read as correct and went on to replicate it.

During the 15th and 16th centuries, people started to get pretty fed up with the irregularities of English, and the first attempts at standardization were made. Between 1582 and 1600, a few different people put out books on ‘correct spelling,’ and then in 1604, the first English dictionary was published. The problem, again, was that none of these efforts were centralized, and thus, they all used different methodologies. Some of the spelling books tried to simplify written English by implementing their own spelling rules, while others decided that the most commonly used form of a word should be made its official form, without changing spelling to fit any prescriptive rules. So, in the end, these early half-hearted attempts at standardization really only made things more complicated.

In summary, up until now, we’ve got English being colored with a whole bunch of loanwords from other languages, whimsical book-printers who are adding extra letters to words to turn a dime, random spelling enthusiasts writing their own dictionaries, and absolutely no centralized body to tell anyone what’s right or wrong. Couldn’t get too much more confusing, right? Wrong.

It could get more confusing, and it did. Between the 14th and 17th centuries, possibly the greatest event in English language pronunciation was underway, giving birth to Modern English: The Great Vowel Shift. The cause of the shift is unknown, but essentially what happened is that the long vowels of Middle English began changing in pronunciation. For example, in Middle English the words ‘meat’ and ‘meet’ were pronounced differently based on their different spellings, but their sounds merged during the shift. Similarly, modern day ‘great,’ which, based on its spelling, should be pronounced like ‘meat,’ instead took on the vowel sound present in ‘mate.’ Overall, the changes were complicated and varied, and they occurred so frequently and rapidly over a period of nearly four-hundred years that written English simply couldn’t keep up.

So, the next time you’re beating yourself up for not being able to remember how to spell a word, just remember: you’re not alone. Thanks to the Great Vowel Shift, the huge number of words that English has taken from other languages (retaining their original spellings at varying levels), and the arbitrary regulation of spelling that took place over hundreds of years without any central plan, English is by far one of the most irregular and confusing modern languages to spell. So cut yourself some slack, and use Spellcheck if you have to.