Posted by Daniel Echevarria in Language and Film & Music on August 4, 2010 0 Comments

Spinning Languages is a monthly feature by Beyond Words that highlights albums from around the world. This month we’re showcasing three great albums from Colombia, Senegal, and Finland. You can order all of them directly from the excellent music store Other Music. Enjoy these August tunes! 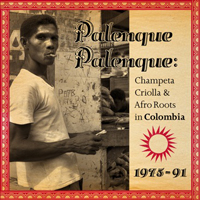 Boasting twenty one pulsating tracks drawn from the northern coasts of Colombia, ‘Palenque Palenque’ reveals a unique and fascinating story of how Afro Colombian music developed from the 1970s onwards and how the local sound-systems in Cartagena and Barranquilla played such an important role in shaping the sound of the Colombian champeta.

Co-compiled by Lucas Silva (resident of Bogota and owner of Palenque Records) and Soundway Records’ Miles Cleret, the album highlights the long relationship that the Caribbean coast of Colombia has with Africa stretching back to the 17th century. Specifically, the rise of the percussion heavy champeta sound, born out of a wave of popularity for psychedelic Afro, Latin & Caribbean music inspired by the DJs of the time.

The influence of the sound-systems spread to local artists as well as re-energising traditional African folk songs and rhythms that had survived since the days of slavery. Record labels recognized the major change in direction from the days when cumbia and porro ruled the hearts of the ghettoes and began employing bands that began experimenting and tapping into these new cultural and musical movements. Disco Fuentes were one of the first labels to recognize this sudden swing and duly signed Wganda Kenya who went onto record some of the first Afrobeat records in Colombia. The trend in recording African music continued at pace with labels like Machuca, Discos Tropical, Orbe & Costeno quickly adapting to the newly adopted sound of the Palenques and bands like Son Palenque, Cumbia Siglo XX and La Cumbia Moderna de Soledad went onto re-adapt Afrobeat rhythms with a Caribbean slant. — Soundway Records Ltd

Preview the album’s tracks below. We recommend track 7, “Dejala Corre”: 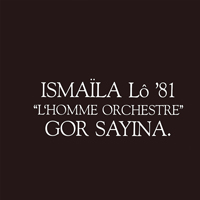 Senegalese superstar Ismaila Lo’s debut album, before he’d fully embraced the slick pop style he’d become so famous for. This is a really unique record, and I’m hard pressed to compare it to any other African LP I’ve heard. Basically a folk record, the entire album is very rootsy and stripped down, with mostly just an accordion accompanying Lo’s acoustic guitar, which he plays at this really driving, syncopated clip. It’s almost minimal and somewhat repetitive in a trance-inducing way, with Lo’s vocals mic’d so spaciously that it creates a rather haunted and moody atmosphere. Just a gorgeous album, the kind of thing that once you put it on renders everything else you’ve heard lately rather facile. He seriously became a world-pop mega-star after this, but that music almost seems to have come from a different planet than these songs, which I simply can’t recommend enough. — Michael Klausman, Other Music

Preview the album’s tracks below. We recommend track 4 , “Adou Calpe”: 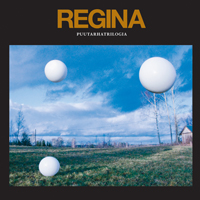 If you live in the western hemisphere, chances are you won’t understand a single word Regina sings, and that’s okay. The Helsinki-based three-piece band sing in their native language of Finnish, lending a surreal, otherworldy quality to their distinguished blend of electronic beats, folk and world music, wild percussion, and slightly-hazy melodies. “Puutarhatrilogia” [“Garden Trilogy”], the band’s first album to be released in the states, is a delightfully trippy and subtly sexy record even if song titles like “Terveiset päiväntasaajalta” (only the first word capitalized, as is the Finnish convention) might sound strange to English speakers. Put simply, singer Iisa Pykäri’s voice would be beautiful in any language, and Regina’s music possesses a similarly universal appeal.

Regina formed in 2005 when Iisa and Mikko Pykäri started making early demos in their living room in Tampere, a largely industrial town that is often called “the Manchester of Finland” due to the disproportionate number of rock bands it has produced. Once Mikko Rissanen joined on drums and the group solidified as a trio, they moved to Helsinki and quickly started receiving -universal accolades in their home country, including a nomination for the Emma award (the Finnish equivalent of the Grammy award) and rave reviews from nearly every magazine in the country. The band recorded and produced “Puutarhatrilogia” – a loosely-structured allegory using the garden as a metaphor for the human mind – entirely in their home studio, digging deep into their love of both modern pop music and a wealth of lesser-known ethnic musical traditions to create a sound that possesses an element of magical realism and sometimes even extends its reach into pure fantasy.

“Saanko jäädä yöksi?” is the album’s centerpiece, anchored by a skittish piano line and sampled snippets of Iisa’s falsetto vocals, before turning into a full-on club banger that wouldn’t be out of place on a dance floor. Elsewhere the album becomes dreamier, stranger, and more languid, with the chromatic piano of “Tapaa minut aamulla” and the plaintive shuffle of “Olen häviöllä, Pauli” evoking the alien soundscapes of Fever Ray and the sultriness of Charlotte Gainsbourg. The band even dips into tango with the lovely “Tango merellä”. By the time the tribal chants of “Musta musta puutarha” are over, you will have fallen for this truly magical band, regardless of what language you may speak. — Friendly Fire Records

Preview the album’s tracks below. We recommend track 4, “Terveiset päiväntasaajalta”: