Posted by Daniel Echevarria in Language and Film & Music on July 6, 2010 1 Comment

Spinning Languages is a new monthly feature by Beyond Words that highlights albums from around the world. This month we’re showcasing three great albums from Brazil, Southeast Asia, and South Africa. We think they’d compliment any barbecue, pool party, or hot summer night. (We’re referring to the temperature.) You can order all of them directly from the excellent music store Other Music. Enjoy these July tunes!

Márcio Local stands at the crossroads of two great traditions in modern Brazilian music, with one foot in samba, the heavily percussive Afro-Brazilian dance music that took its modern form in the early twentieth century, and the other in soul, the African American music rooted in the blues that attracted a mass audience in Brazil in the 1960s and 1970s. Once regarded as a faddish import, soul music has been effectively Brazilianized such that it now constitutes a local tradition in big cities like São Paulo and Márcio’s home town of Rio de Janeiro. Márcio has also discovered ways to combine these two traditions to forge new variations of samba-soul by exploring the ever-expanding modern soundscape of Rio. He is also something of a sensual romantic who makes music thinking about lazy Saturday afternoons at the beach, a game of soccer, the drama of sexual seduction, and the bustle of the urban scene. In this way, he belongs to another tradition in Brazilian music that celebrates the pleasures of everyday life and the redemptive power of a catchy tune. –© Samantha Tillman, Luaka Bop

Preview the album’s tracks below. We recommend track 5, “Sentimento Rei”:

Funny thing happened to me back in 2001, during my first trip to Singapore. I was in a clothing store in Causeway Pointe, and an old ‘60s tune was blasting out of the stereo speakers. It sounded like your typical ‘60s pop hit, but the lyrics were sung in Malay! I was entranced, and wouldn’t be satisfied to just hear it just once. I spent the rest of my trip combing the local antique stores and flea markets, grabbing all the vinyl I could find. My first purchase was The Mysterians’ ‘Forget the Time’ ‘b/w My Girl Les,’ found at an antique store on Orchard Road. The cover, featuring the band wearing black masks and standing in green background, is such a classic that I spent a few weeks admiring it before finally purchasing a turntable so I could hear it. But when I finally did, lo and behold, an obsession was born. Nine years and five overseas trips later, my collection now boasts more than 600 rare titles from the region, which also includes Malaysia and Indonesia. In this first volume, I present a handful of my favorite finds. Some of these bands experienced regional success at best, while others disappeared after one or two recordings. Very few left behind any written history. I didn’t concern myself with which songs were hits, but rather which ones happened to appeal to this pair of western ears. I have included a variety of tunes, from rockers to ballads, covers and originals, all sung in a variety of native languages. A few instrumentals have been thrown in for good measure. Now on to the music…LET’S A’ GO-GO!!! –© Silver Tortoise

Preview the album’s tracks below. We recommend track 13, “Then I Kiss Her”: 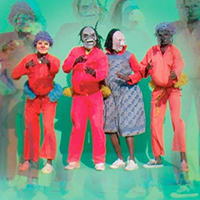 My name is Richard, my stage name is Nozinja, from Nozinja Music Productions. I’m from Giyani in Limpopo. I’m an engineer, I’m a producer, I’m a composer. It’s my record label. I’m the marketing manager. I transport them — I’ve got a micro-bus. I do everything on my own. I’ve got manufacturing. I buy CDs, I will silk-screen myself. I sing, too.

We don’t use the sounds of the hip-hop guys, or the afro-pop, or whatever, we’re using Shangaan sounds. The traditional Shangaan music is fast. You play it slow, they won’t dance. Shangaan is fast. While others play at 110, we are at 180, 182, 183. And when you hear those marimba beats and that live guitar through the keyboard, you know it’s Shangaan. You hear those toms, then you know, this is Shangaan music.

Shangaans don’t typically love Joburg. They work in Joburg, but their heart is in Limpopo. People want to go back to the country and to their families. Limpopo is rural. It’s hot, very hot and vibey. Shangaan music is about love. It’s about a wife and a husband. We are family-oriented musicians. Now Shangaan music is both, rural and urban. We jumped the boundaries by changing that bass into playing with the marimba, that’s when we touched the nerves, and now it’s all over. –© Nozinja, Honest Jon’s Records

ALTA has provided Language Training to government agencies, businesses of all sizes, and non-profit organizations for 30 years. As trailblazers in the area of language training through video-conferencing technology, we invite you to learn more about our Online Language Training programs. The only unconditionally guaranteed language lessons in the business.