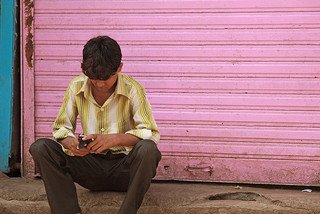 If you had told a linguist five years ago that text messaging would help save an endangered language, he or she probably would have laughed in your face. But it’s true, according to Samuel Herrera of the linguistics laboratory at the Institute of Anthropological Research in Mexico City. He found that young Chileans are “producing hip-hop videos and posting them on YouTube using Huilliche, a language on the brink of extinction.” Outside of Chile, teenagers in Mexico and in the Philippines have been sending text messages in Kapampangan and Huave. While text messaging has often been lamented as the end of language with its shorthand of “LOL” and using “2” for the word “to” or “too,” it appears that in certain cultures, it’s accessibility is a means to preserve faltering languages.

But why these regional languages with rare usage? Because they are exclusive—the adults in villages and towns no longer use the regional vernacular, so teenagers have picked it up as a means to speak around their parents. It’s like the “No Parents Allowed” sign American teens often post on their bedroom doors. Herrera and other researchers are obviously excited about the “discovery.”

In fact, according to Dr. Gregory Anderson, young people need to be the ones reviving a dying language. The director of the Living Tongues Institute for Endangered Languages in Salem, Oregon, says that somewhere between the ages of six and 25, people make a definitive decision whether or not to say to stay or break with a language.

Through peer usage, rare languages are being preserved and perpetuated throughout communities.

Beyond the already stated languages, Luke Lindemann on his blog Bhasha Beguine, brings forth another great example of texting and language in Nepal. He writes:

Reading the article reminded me of texting in Nepal. From what I’ve seen in Nepal there is a lot of code-switching between Nepali and English, which also acts a shibboleth… Nepali is by necessity written with a Roman script. The Nepali version of “What’s up?” is “के छ ?” – “ke chha?”(‘What is?’) But in text messages this is often written: “k 6?”

So why the “6” if it’s supposed to represent the word “chha?” Lindemann gives the first nine Devanagari numbers:

All in all, this is a nifty representation of language use and reuse in Nepalese culture.

Does the future of language rest in the hand that holds a cell phone? Only time will tell, but it does seem that with the move towards all digital archives, texting will inevitably have to play a role in the bigger picture.