The Etymology of Cowboy

Posted by Jes Gearing in Etymology on October 8, 2009 2 Comments 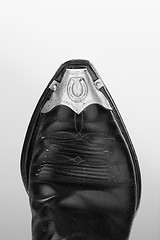 Last night I had the pleasure of hearing Ronny Cox, the actor who played Drew Ballinger in Deliverance and Richard “Dick” Jones in RoboCop, perform his country western music at a small venue. While Cox has played hundreds of roles in tv and film, I wasn’t expecting his music to be worth a listen, but it was.

One of the songs that piqued my interest was an old cowboy song, “Diamantina Drove” from Australia about the drovers, the equivalent of a cowboy. The song could have been about an American cowboy, it heralded the usual tropes of cattle and open spaces and the call of the frontier, so it got me to thinking about cowboys everywhere — what are they called, what sets them apart country-to-country, when did we first start talking about cowboys etc.

Our term cowboy was first documented in the English language by 1725. A direct translation of the Spanish word vaquero, one who manages cattle from horseback, cowboy has come to mean the same thing — a man employed to take care of grazing cattle on a ranch (OED). Vaquero, of course, is rooted in the word vaca, or cow, and stems from the Latin vacca. Another English word for cowboy, buckaroo, has a debatable etymology. It is generally attributed to an Anglicizing of vaquero, but, apparently, one scholar has suggested that it possibly stems from the Arabic bakara or bakhara, meaning heifer. Other terms include cowpoke, cowhand, and cowpuncher — all originating in the mid- to late-1800s. Regionally specific, cowboy is a term common throughout the west and particularly in the Great Plains and Rocky Mountains, Buckaroo is used primarily in the Great Basin and California, and cowpuncher mostly in Texas and surrounding states, Wiki.

The concept of the cowboy originated in Spain, but the system of herding and managing cattle on horseback quickly spread to other areas. In Mexico, cowboys are called vaqueros in the northern regions and charros in the Jalisco and Michoacan regions. Originally, however, the cowboys were called caballeros, literally translated as gentleman and stemming from the Spanish word for horse, caballo. Caballeros were few and far between, they were the wealthy elite, and vaqueros, the independent cattlemen, certainly outnumbered the caballeros.

Vaqueros were proverbial cowboys — rough, hard-working mestizos who were hired by the criollo caballeros to drive cattle between New Mexico and Mexico City, and later between Texas and Mexico City. The title, though denoting a separate social class, is similar to caballero, and is a mark of pride. National Geographic.

In Argentina, Uruguay, southern Chile and the southern region of Brazil, countries characterized by the pampas, a huge grassy plain that covers more than 750,000 km, cowboys are called gauchos. Like their northern counterparts, gauchos, were more common in the 19th century when the cattle herding business was the main activity in the area, but there are still working gauchos today. Etymologically, it possibly derives from the Mapuche cauchu, or “vagabond,” or from the Quechua huachu, for “orphan.” The first use of gaucho in the Spanish language dates to the time of Argentine independence, 1816. In other parts of Chile, cowboys are sometimes called huasos, in Venezuela they are called llaneros, and in Peru they are called chalan.

Farther west in Australia are the stockmen or drovers. Stockman is the name given to any experienced individual who manages the livestock on a large property. Likewise, drover, denotes an experienced stockman. The terms jackaroo (male) and jillaroo (female) denote inexperienced stockmen or trainees. Drover traces its roots back to the noun drove, the action of driving. Drove comes from the Old English draif, which then, through two ablaut grades of drafan became drive. Interestingly, drove refers not only to an action, but also to “A number of beasts, as oxen, sheep, etc., driven in a body; a herd, flock.” As an action, drove first appeared in the English language as early as 971 CE; as referring to a flock or herd, drove appeared as early as 1121 CE. It’s not difficult to see why cowboys are drovers — not only do they drive the herd, the heard is also a drove.

Looking back to Europe, Italy claims cowboys of its own. Butteri (buttero in the singular) are found in the region of Maremma, in Tuscany in the Northern Latium and in the Pontine Marshes. Butteri herd both cattle and sheep, but like cowboys everywhere, they do so on horseback. Unfortunately most of this region is developed, so only five or six herds are still maintained by butteri. I’m not having any luck looking up the etymology, so someone correct me if I’m wrong, but it looks like buttero comes from the verb buttare, to throw or to knock down. It seems logical to me, cattle driving or sheep herding definitely includes throwing down animals — think of the rodeo.

The next time I throw down an animal (which I’m not sure when I would ever do that, but I might, who knows), I’m definitely going to think of the butteri, the drovers, and the gauchos. Cowboy culture is everywhere, literally.