The Language of Beer 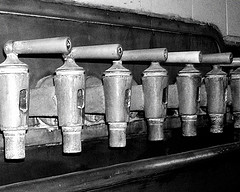 Following up with our look at the origins of words related to food and spirits, here is a brief history of the language of beer:

One of the world’s oldest and certainly most well-loved beverages has a history that dates back thousands of years BC. Spread through Europe by Germanic and Celtic tribes, beer’s basic ingredients have not changed drastically from its Neolithic roots.

Along with a starch source such as barley and an ingredient to aid fermentation, such as yeast, beer contains a plethora of flavoring agents like fruits, honey, plants, spices, and most typically, hops. To help us gain a deeper enjoyment of this thirst-quenching beverage, we can examine the etymology of its components and the various kinds of beers that exist today.

The word “beer” most likely stems from a 6th-cenury Germanic loan from Latin. Monks – who were the first Europeans to brew beer – borrowed from the Latin bibere, meaning “to drink.” We can see traces of this usage in the English verb “imbibe.” Another version links beer with the Proto-Germanic word beuwo, meaning “barley.”

The two primary types of beer are lagers and ales. Ales are fermented and brewed at higher temperatures than lagers (a difference of about 20 degrees Fahrenheit) and use a different type of yeast. Ales are far more prevalent than lagers, and are characterized by a full-bodied flavor. The term “ale” stems from the Proto-Germanic aluth, meaning beer, and perhaps prior to that from the Proto-Indo-European alum, a word having connections to sorcery and magic. Lagers derive their name from the German Lager, meaning “storehouse.” Until the early 15th century, only the term “ale” was used to refer to beer of any sort.

Stouts, porters, and wheat beers are types of ales. Stouts, for their robust flavor, derive their name from the adjective designating something proud, valiant, and strong. Porter also derives its name from its strength, acquiring this title in the early 18th century due to being high in alcohol content and cheap – a favorite amongst laborers.